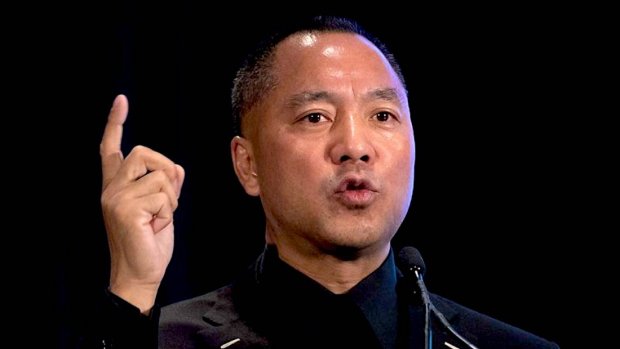 Ashley Cullins reports: A Chinese billionaire and Mar-a-Lago member is suing WarnerMedia over a CNN segment that he claims falsely implies he committed espionage and was on the verge of being deported.

Guo Wengui, who’s known as Miles Kwok in the U.S., on Friday filed a $50 million lawsuit against WarnerMedia and CNN anchor Erin Burnett for defamation. According to the complaint, Guo is an “outspoken and vitriolic critic” of the Chinese Communist Party who’s seeking asylum in the U.S. because his public statements about the Chinese government led to the arrest of his family members and the freezing of his assets.

Since he fled in 2014, Guo claims the Chinese government has gone to “extensive lengths” to have him extradited, including asking CEOs of large companies and lobbyist Elliot Broidy to put pressure on President Donald Trump. He maintains the Chinese government is actively working to discredit him and he’s sued multiple people for defamation alleging they falsely labeled him a spy, a fraud, a swindler and a rapist.

Guo is now claiming that he was defamed when Burnett began a Jul 23 CNN segment by teasing “New tonight, the Chinese billionaire and member of Mar-a-Lago accused of being a spy.”

“Clearly, the intent was to garner views for the sensational ‘story’ with no regard for the truth and less investigation into the underlying facts,” writes attorney Aaron Mitchell in the complaint. “The CNN broadcast went on to make a number of false statements, along with various other statements intended to mislead its viewers and cast Plaintiff in a negative light.”

He also takes issue with statements made by Burnett’s guest, Miami Herald reporter Sara Blaskey, in connection with another New York legal fight. She said … (read more)
via Hollywood Reporter