A revolutionary American scientist is using subatomic physics to decipher 2,000-year-old texts from the early days of Western civilization.

It’s July 12, 2017, and Jens Dopke walks into a windowless room in Oxfordshire, England, all of his attention trained on a small, white frame that he carries with both hands. The space, which looks like a futuristic engine room, is crowded with sleek metal tables, switches and platforms topped with tubes and boxes. A tangle of pipes and wires covers the walls and floor like vines.

In the middle of the room, Dopke, a physicist, eases the frame into a holder mounted on a metal turntable, a red laser playing on the back of his hand. Then he uses his cellphone to call his colleague Michael Drakopoulos, who is sitting in a control room a few yards away. “Give it another half a millimeter,” Dopke says. Working together, they adjust the turntable so that the laser aligns perfectly with a dark, charred speck at the center of the frame.

Dozens of similar rooms, or “hutches,” are arrayed around this huge, doughnut-shaped building, a type of particle accelerator called a synchrotron. It propels electrons to near light speed around its 500-meter-long ring, bending them with magnets so they emit light. The resulting radiation is focused into intense beams, in this case high-energy X-rays, which travel through each hutch. That red laser shows the path the beam will take. A thick lead shutter, attached to the wall, is all that stands between Dopke and a blast of photons ten billion times brighter than the Sun.

The facility, called Diamond Light Source, is one of the most powerful and sophisticated X-ray facilities in the world, used to probe everything from viruses to jet engines. On this summer afternoon, though, its epic beam will focus on a tiny crumb of papyrus that has already survived one of the most destructive forces on the planet—and 2,000 years of history. It comes from a scroll found in Herculaneum, an ancient Roman resort on the Bay of Naples, Italy, that was buried by the eruption of Mount Vesuvius in A.D. 79. In the 18th century, workmen employed by King Charles III of Spain, then in charge of much of southern Italy, discovered the remains of a magnificent villa, thought to have belonged to Lucius Calpurnius Piso Caesoninus (known as Piso), a wealthy statesman and the father-in-law of Julius Caesar. The luxurious residence had elaborate gardens surrounded by colonnaded walkways and was filled with beautiful mosaics, frescoes and sculptures. And, in what was to become one of the most frustrating archaeological discoveries ever, the workmen also found approximately 2,000 papyrus scrolls. 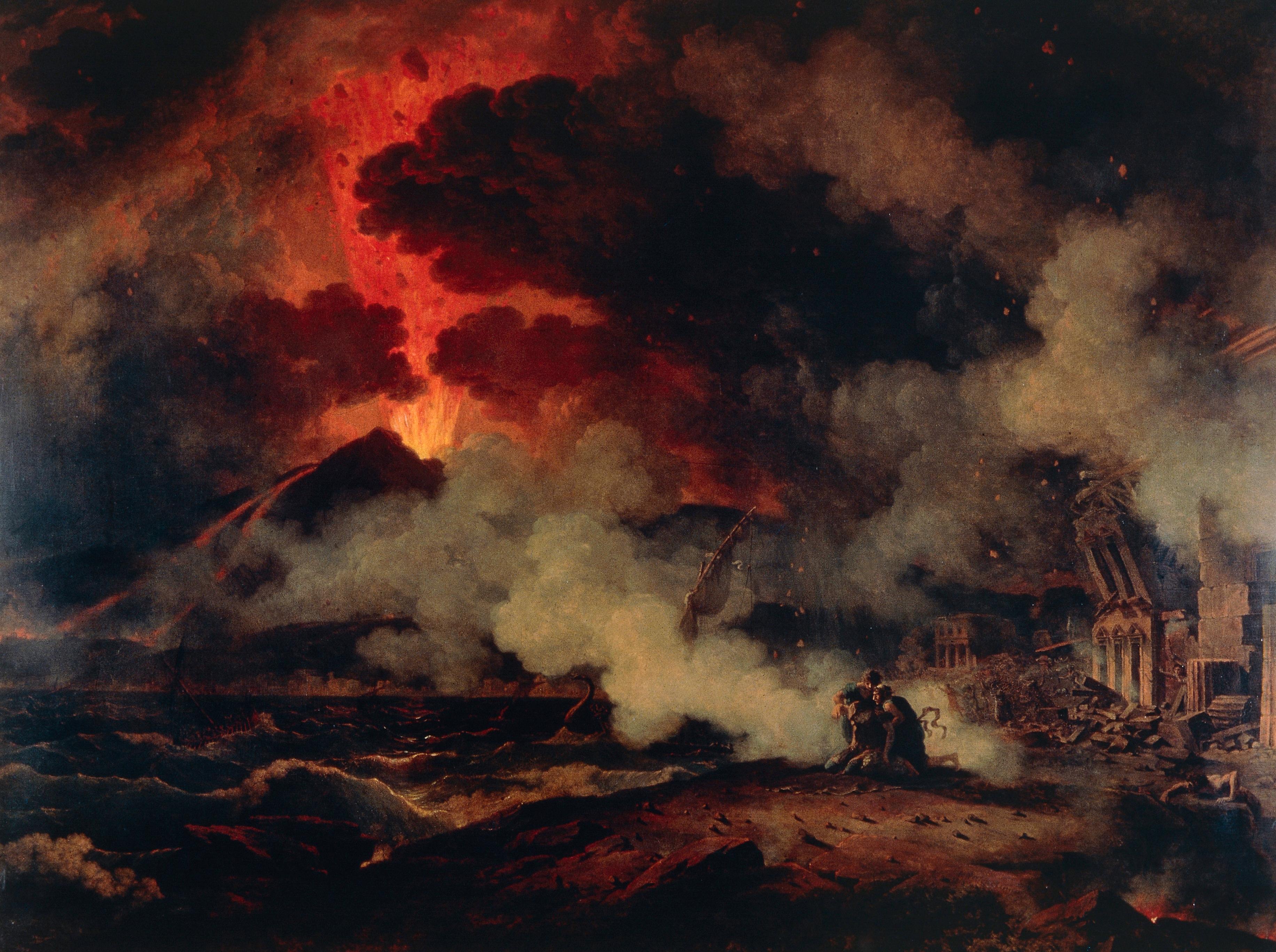 Among the many thousands killed by Vesuvius’ eruption was Pliny the Elder, the ancient world’s greatest naturalist, whose death is depicted in an 1813 painting by Pierre Henri de Valenciennes. (Deagostini / Getty Images)

The scrolls represent the only intact library known from the classical world, an unprecedented cache of ancient knowledge. Most classical texts we know today were copied, and were therefore filtered and distorted, by scribes over centuries, but these works came straight from the hands of the Greek and Roman scholars themselves. Yet the tremendous volcanic heat and gases spewed by Vesuvius carbonized the scrolls, turning them black and hard like lumps of coal. Over the years, various attempts to open some of them created a mess of fragile flakes that yielded only brief snippets of text. Hundreds of the papyri were therefore left unopened, with no realistic prospect that their contents would ever be revealed. And it probably would have remained that way except for an American computer scientist named Brent Seales, director of the Center for Visualization & Virtual Environments at the University of Kentucky.

The papyrus scrap in the white frame, held between two layers of transparent orange film, is just three millimeters across, and sports one barely visible letter: an old-fashioned Greek character called a lunate sigma, which looks like a lowercase “c.” Next to the turntable, shielded inside a tungsten tube, is a high-resolution X-ray detector, called HEXITEC, that has taken engineers ten years to develop. Seales believes that it will pick up the desperately faint signal he’s looking for and, in doing so, “read” the tiny Greek letter. “When I started thinking about this, this technology didn’t exist,” he says. “I don’t think there’s another detector in the world right now that could do this kind of measurement.” If it works, imaging the single letter on this charred crumb could help to unlock the secrets of the entire library … (read more)