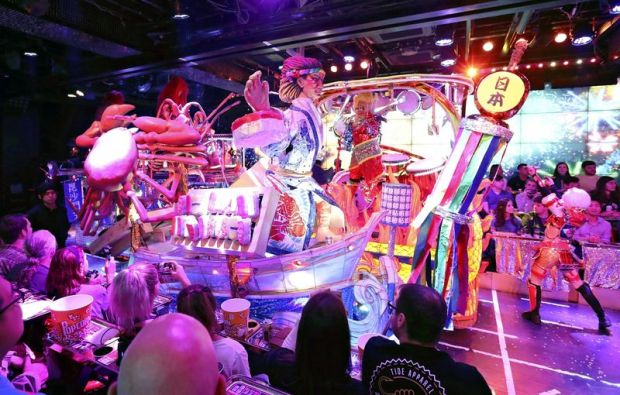 People react to the sushi chef robot, center, at the Robot Restaurant in Kabukicho in the Shinjuku area of Tokyo. The Yomiuri Shimbun.

Yuka Matsumoto reports: Tokyo is bustling with a tide of foreign tourists. According to a Tokyo metropolitan government survey, the most popular destination by far is Shinjuku.

I visited the area with Yukiko Konosu, a translator who is knowledgeable about literature and entertainment in English-speaking countries, in a bid to experience the “Cool Japan” that fascinates overseas visitors.

Our first destination was the Shinjuku Tourist Information center near JR Shinjuku Station. Since it opened in December 2016, there have been 300,000 visitors — with 70 percent of them coming from outside Japan.

The Shinjuku Convention & Visitors Bureau, a general incorporated association, operates the facility. It has a reputation for being “a center that does not say no.” It handles all issues — even small everyday matters that arise during a typical stay.

“When it comes to dining, the Golden-gai area in Shinjuku is the hot spot,” said Kanae Kikuchi, executive officer of the bureau.

“To regular visitors looking for alternative spots, however, we point them to Omoide Yokocho near the West Gate of Shinjuku Station.”

One of the most appealing places among foreign tourists is Kabukicho, home to spots such as the Samurai Museum, not to mention a huge Godzilla statue.

We visited Ninja Trick House, which has gained attention on TripAdvisor and other word-of-mouth-type websites.

After a video about the history and culture of the ninja, a fusuma sliding door opened and a ninja appeared. We were impressed by the unique kagizume hook-like tool, the kusarigama chain and sickle, as well as a secret shelf.

We then moved to an adjoining room — the training hall for a ninja experience.

Konosu held a sword and took on the challenge of throwing shuriken (ninja throwing stars). “That feels great!” she said, as she hit the target with her weapons.

The experience at Ninja Trick House lasts about … (read more)