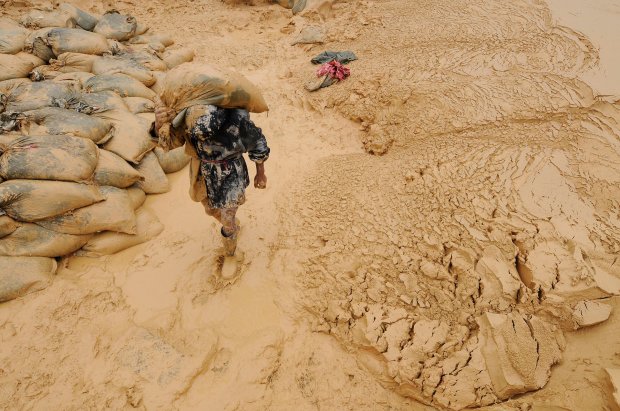 A man works at the site of a rare earth metals mine at Nancheng county, Jiangxi province October 20, 2010.REUTERS/Stringer

Jeremy Berke reports: Researchers have found a deposit of rare-earth minerals off the coast of Japan that could supply the world for centuries, according to a new study.

The study, published in the journal Nature on Tuesday, says the deposit contains 16 million tons of the valuable metals.

Rare-earth minerals are used in everything from smartphone batteries to electric vehicles. By definition, these minerals contain one or more of 17 metallic rare-earth elements (for those familiar with the periodic table, those are on the second row from the bottom).

Yasuhiro Kato, an associate professor of earth science at the University of Tokyo, displays a mud sample extracted from the depths of about 4,000 metres (13,123 ft) below the Pacific ocean surface where rare earth elements were found, at his laboratory in Tokyo July 5, 2011.

These elements are actually plentiful in layers of the Earth’s crust, but are typically widely dispersed. Because of that, it is rare to find any substantial amount of the elements clumped together as extractable minerals, according to the USGS. Currently, there are only a few economically viable areas where they can be mined and they’re generally expensive to extract.

China has tightly controlled much of the world’s supply of these minerals for decades. That has forced Japan — a major electronics manufacturer — to rely on prices dictated by their neighbor.

A new finding that could change the global economy

The newly discovered deposit is enough to “supply these metals on a semi-infinite basis to the world,” the study’s authors wrote in the study.

There’s enough yttrium to meet the global demand for 780 years, dysprosium for 730 years, europium for 620 years, and terbium for 420 years.

The cache lies off of Minamitori Island, about 1,150 miles southeast of Tokyo. It’s within Japan’s exclusive economic zone, so the island nation has the sole rights to the resources there.

“This is a game changer for Japan,” Jack Lifton, a founding principal of a market-research firm called Technology Metals Research, told The Wall Street Journal. “The race to develop these resources is well underway.”