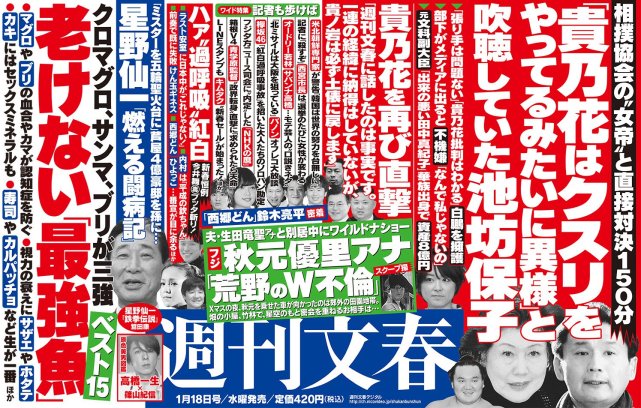 TOKYO (TR) – Last month, a weekly tabloid alleged that a popular announcer for Fuji TV is engaged in an extra-marital affair with a producer at the station, a relationship whose physical side appears to have been carried out in his vehicle.

In the January 18 issue of Shukan Bunshun (Jan. 18), the magazine claims that announcer Yuri Akimoto, 34, secretly met with the producer, who is married with children, a Hakone hot springs resort and other locations between the end of last year and the News Year’s holiday.

Working off a tip it received last year, the magazine followed the couple to a yakitori(grilled chicken) restaurant. Photographs show Akimoto exiting the restaurant just prior to the producer in question.

Another shot shows the producer’s white van parked on a narrow road next to a bamboo grove in a suburb of Yokohama on Christmas Eve. According to the report, the pair spent 30 minutes together in a back seat … (read more)

via The Tokyo Reporter