As Japan celebrates the year of the dog, electronics giant Sony on Thursday unleashed its new robot canine companion, packed with artificial intelligence and internet connectivity.

The sleek ivory-white puppy-sized “aibo” robot shook its head and wagged its tail as if waking from a nap when it was taken out of a cocoon-shaped case at a “birthday ceremony” held in Tokyo.

Seven-year-old boy Naohiro Sugimoto from Tokyo was among the first to get his hands on the shiny new toy, which he described as “heavy but cute”.

“The dog we had previously died… We bought this robot dog as we wanted a (new) family,” he said.

The 30-centimetre (one-foot) long hound-like machine comes complete with flapping ears and its eyes, made of a cutting-edge light-emitting display, can show various emotions. 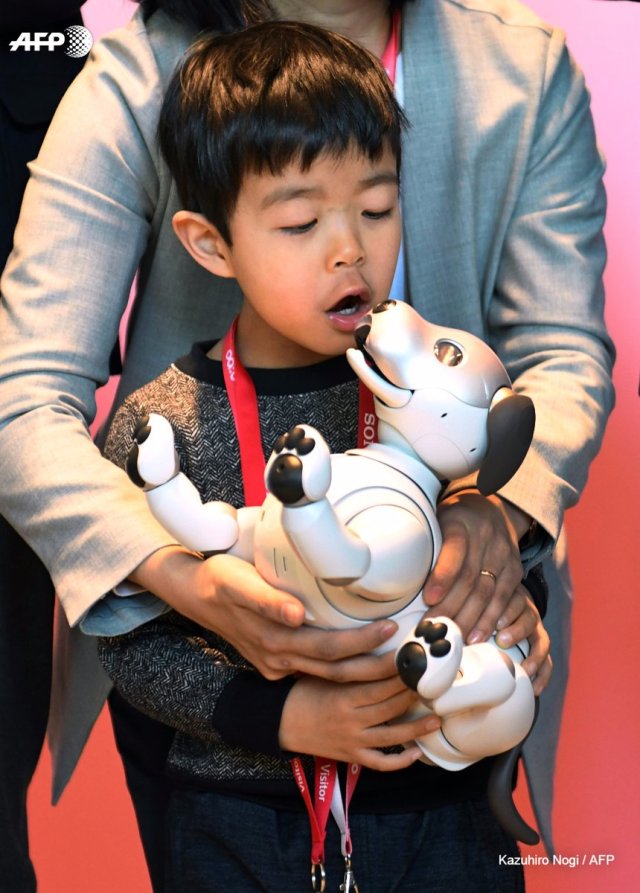 Aibo is also fitted with an array of sensors, cameras and microphones and boasts internet connectivity.

The owner can play with the pet remotely via smartphone and even teach it tricks from the office for the faithful hound to perform when its “master” gets home.

It builds up a “character” by interacting with people and while not always submissive, it is friendly towards those who are kind to it.

What the machine “learns” is stored in the cloud so its “character” can be preserved even in the event of hardware damage.

Photos it takes can also be shared.

But such cutting-edge canine technology does not come cheap, with the aibo costing nearly $3,000 for a three-year package, including software services such as data storage.

Aibo is not the Japanese electronic giant’s first foray into the animal robot entertainment world.

Its earlier robot dog was put to sleep more a decade ago — a victim of business restructuring — shocking fans.

Over the following years, more than 150,000 units were sold, with numerous models ranging from gleaming metallic-silver versions to round-faced cub-like models.

But by 2006, Sony was in trouble. Its business model was under pressure and it was facing fierce competition from rivals in all fields. .. (read more)
via AFP