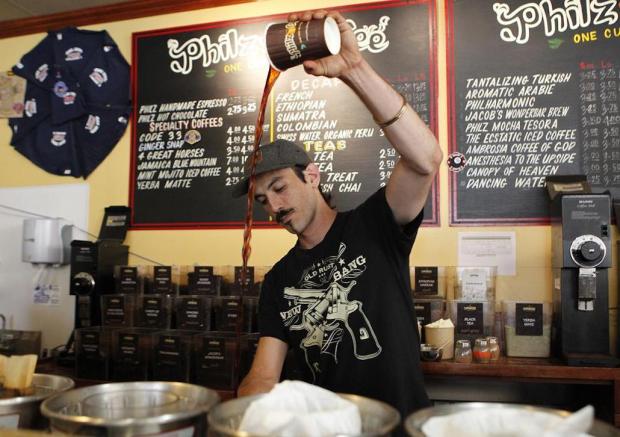 Handcrafted coffee, an artisanal icon, is losing ground to automation.

Julie Jargon reports: At a Philz Coffee shop in Pasadena, Calif., a barista carefully fits a paper filter into a canister, adds ground coffee to it and then, with one arm raised above his head, slowly lowers his arm while pouring hot water over the grounds.

He stirs the brewing coffee with a spoon while maintaining eye contact and conversation with the customer. Four minutes later, the coffee is done.

A mile away, at an Intelligentsia Coffee & Tea shop, a cup of coffee is delivered in less than 30 seconds, without any banter between barista and customer. The shop recently reintroduced large-batch coffee makers after shelving them years ago.

The practice of making coffee by the cup—known as a pour-over—has been an essential skill for gourmet baristas for nearly a decade. The purposefully slow, personal nature of the ritual is an icon of the artisanal movement. Now, uttering words like “efficiency” and “consistency,” some coffee shops are embracing the perks of machines.

“We realized that a lot of customers loved getting a cup brewed for them, but in today’s day and age they’re not willing to wait five to seven minutes to get it,” said Intelligentsia Chief Executive James McLaughlin.

As you might imagine, some pour-over purists are cringing.

James Freeman, founder of Blue Bottle Coffee, a small chain that likens the manual pour-over ritual to a meditation, said he’ll consider serving batch-brewed coffee “when hell freezes over and there is a skating party.”

He views automated pour-overs the same way. Mr. Freeman, who recently sold a majority stake in Blue Bottle to packaged-foods giant Nestlé, says that because beans are ground and the hot water is poured to order, one cup at a time, manual pour-overs produce the freshest cup.

It was only a matter of time before automation came to fancy coffee. High-tech beer brewers, known as “beerbots,” have automated home brewing. Robots are making pizza at a Mountain View, Calif., pizza delivery service. The CaliBurger chain said it plans to use a robot named Flippy to man the grill at 50 of its restaurants.

The economics are simple: A large-batch coffee machine can make more than 100 cups of coffee per hour, while one barista can only churn out about nine pour-overs during that time.

“Every industry is facing the threat of automation,” said Matt Perger, a former barista in Australia and past winner of the World Brewers Cup, a competition of handcrafted … (read more)