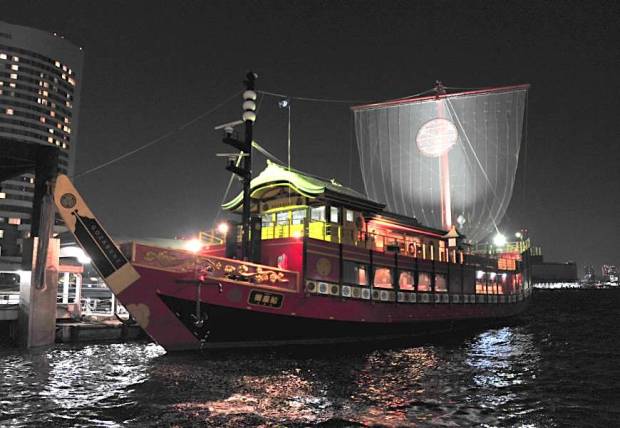 The 486-ton Atakemaru is themed on ships used by samurai feudal lords during the Edo Period. | YOSHIAKI MIURA

Yoshiaki Miura reports: A new Tokyo Bay samurai-themed cruise ship fashioned after those used by feudal lords back in the Edo Period (1603-1868) promises tourists visiting the nation’s capital an interesting contrast between modernity and tradition.

The Atakemaru, which is 49.7 meters long and 486 tons in weight, is modeled after ships used by the daimyo feudal lords who served the Tokugawa shogunate under thesankin kotai (alternate attendance) system — a policy implemented by the shogunate to strengthen control over the regional lords by having them alternate their places of residence between Edo (present-day Tokyo) and their regional homes.

Okayama-based transport firm Ryobi Holdings launched the Atakemaru in March. The ship’s exterior is colored in bright red and yellow, while the Tokugawa emblem adorns its interior, which is decorated using traditional hand-crafted wood and other traditional items. 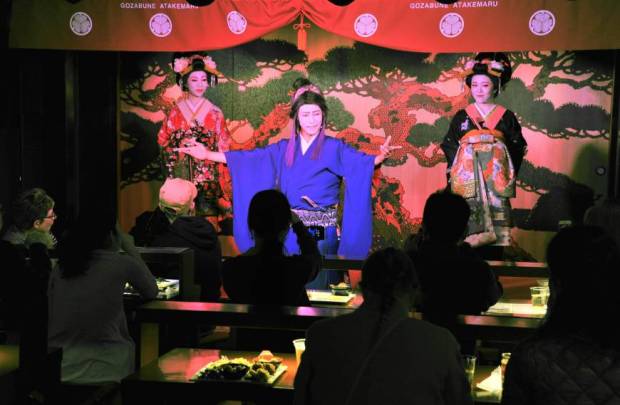 Guests can savor a scenic view of Tokyo Bay on a day cruise or enjoy dinner and traditional stage performances on a night cruise. For the convenience of foreign tourists, the ship is equipped with chairs instead of Japan’s famous floor-based seating.

On a recent cruise, passengers aboard the ship included tourists from the U.S., Russia, Canada, China and Malaysia … (read more)