The boom in coffee shops is starting to hurt business owners. Above, inside 21st Street Coffee and Tea, an independent operator in Pittsburgh. Photo: Stephanie Strasburg for The Wall Street Journal

Julie Jargon reports: America’s coffee market is getting too crowded.

Consumers’ hankering for caffeine and quality coffee has fueled a big build out of cafes in the last five years, especially in dense urban areas such as New York, San Francisco and Portland, Ore. There are now nearly 33,000 coffee shops in the U.S., including those run by big chains such as Starbucks , SBUX -0.45% up 16% from five years ago, according to market research firm Mintel.

The boom in coffee shops is starting to hurt business owners. Consumers are visiting traditional coffee shops less often when there are a plethora of cheaper options. Everyone from McDonald’s Corp. MCD 0.08% to gas stations is hawking specialty coffee. Even grocery stores are expanding the space devoted to bottled and canned coffee drinks, which Mintel says poses a threat to coffee shops. Traffic growth to large coffee chains such as Starbucks is slowing, while traffic to small coffee chains and independent shops is declining, according to NPD Group Inc.

At a Chevron gas station just north of Los Angeles, a 12-ounce cup of coffee can be had for $1.49, while a specialty coffee drink at a Starbucks less than a mile away can cost nearly $5. A 13.7-ounce bottle of Dunkin’ Donuts iced coffee costs $2.89 at a nearby grocery store.

The troubles facing the coffee business are similar to those plaguing the broader food-retail and restaurant industries, which have an oversupply of retail space that are competing against a proliferation of new food options. In addition, coffee shop visits are less frequent with people curtailing mall shopping and as they work from home or spend more time in their offices during the workday. 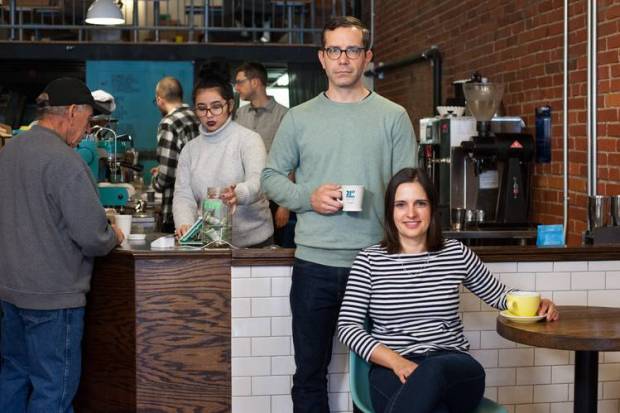 Luke and Alexis Shaffer inside their Pittsburgh coffee shop 21st Street Coffee and Tea. The couple is looking for a new location after their rent went up. PHOTO: STEPHANIE STRASBURG FOR THE WALL STREET JOURNAL

Coffee-shop owners, executives and industry experts now warn the market is headed for a reckoning.

“Retail is crowded and not everyone will be around several years from now,” said Dave Burwick, chief executive of Peet’s Coffee.

Dunkin’ Donuts recently said it would scale back new-store openings as it redesigns its shops to cater to on-the-go consumers. Starbucks, which accounts for nearly 42% of coffee shops in the U.S., said it isn’t planning to slow the pace of new-store openings, but cited the challenging retail environment as it reduced its long-term sales and profit growth outlook last week.

The total number of coffee shops in the U.S. is forecast to grow by just over 2% this year, the slowest growth rate in the last six years. In coming years, Mintel said, the annual growth rate will fall even lower.

Large competitors have begun to swallow up smaller ones, and more consolidation is expected.

JAB Holding Company, a privately held business group in Europe, has been on a coffee-buying spree in the U.S. in recent years. It owns Keurig Green Mountain and Peet’s Coffee, which recently acquired a majority stake in Intelligentsia Coffee & Tea and Stumptown Coffee Roasters … (read more)