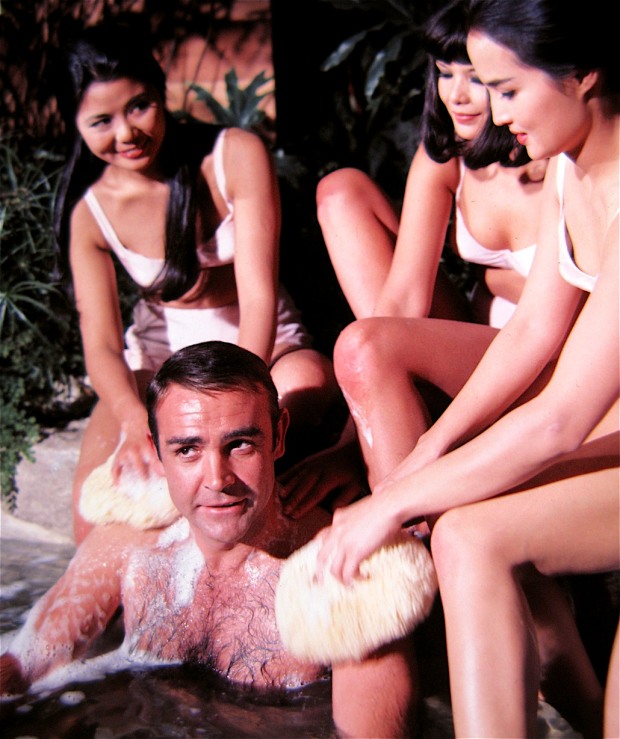 Soaped-down but not stirred: James Bond (Sean Connery) gets a lesson in Japanese omotenashi (hospitality) in ‘You Only Live Twice.’ While much of the film is cringe-worthy today, it serves as a crude historical record of Western views of Japan in the 1960s. | AP

Philip Patrick writes: ‘You Only Live Twice,” the only “James Bond” film — to date — to be set in Japan, celebrated its 50th anniversary this year. While undoubtedly great fun, it must be admitted that it’s a long way from being a masterpiece of cinema.

Its own screenwriter, Roald Dahl — yes, he of “Charlie and the Chocolate Factory” fame — described his own hastily written script as “a load of bull——,” and its silly plot, tin-pot gadgets and unimpressive special effects (even for 1967) prompted one critic to liken it to “an episode of ‘Thunderbirds.’”

It marked the point at which the Bond films started to get silly — when exotic locations, underground lairs, space rockets and girls in bikinis became essential elements, the subtleties of the original books were dispensed with, and the effort involved in trying to follow the increasingly preposterous, convoluted plots outweighed the benefit in actually doing so.

But as a historical document, a record of the Western world’s view of Japan at a key point on the road to post-World War II rehabilitation, it remains fascinating. And in this anniversary year — the film sits neatly three years after Tokyo’s first Olympic adventure and three years before its second, and on the basis of the axiom that you can learn more about a period from its bad art than its good, it is a timely moment to take a second look at this curious piece of cinema.

Before “YOLT,” Hollywood’s treatment of Japan had, with one or two honorable exceptions, been characterized by one-dimensional historical epics or propagandistic wartime thrillers, packed with cultural cliches and marred by “yellow-face” casting. Infamous examples include “The Barbarian and the Geisha” (1958), “My Geisha” (1962) and “The Teahouse of the August Moon” (1956), for which the authors of “The Golden Turkey Awards” awarded Marlon Brando the prize for the “most ludicrous racial impersonation.”

[Read the full story here, at The Japan Times]

On the surface, “YOLT” hardly represents any significant advance. It has its fair share of lazy Oriental anachronisms and jarring incongruities, from rickshaws on the streets of Tokyo to ninjas dressed for karate and used as a modern-day defense force, while Sean Connery’s attempts at Japanese pronunciation — Tokyo via Fountainbridge, Edinburgh — is atrocious: Anyone for “sakky”? 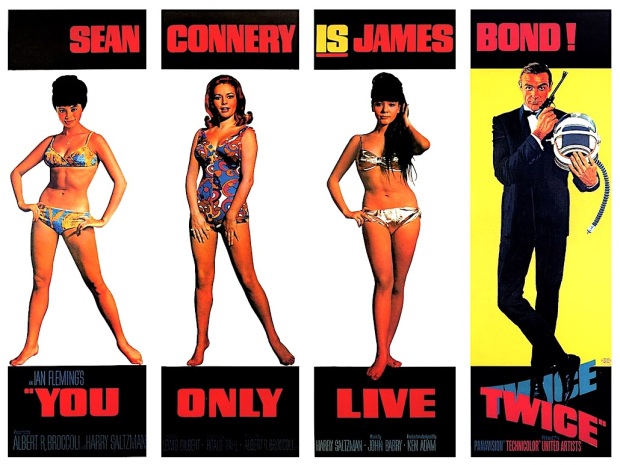 But look past the tourist tat and some more interesting themes do emerge. “YOLT” is a bit like Bond counterpart Dikko Henderson’s Tokyo apartment in the film, an “odd mixture of styles.” Old enmities remain, with plenty evidence still of bitterness and suspicion, but Japan’s modern face has at least been noticed, and some of the features do peek through. There is the sense that times are changing — of a very real, if wary, respect for a new modern Japan.

This reappraisal had two accelerants. First, the successful 1964 Tokyo Olympics, the first to be beamed directly into people’s living rooms through satellite television feeds, had pulled back the curtain on the mysterious former nemesis, to reveal a stable, fully functioning potential ally. Second, there was the economic miracle that had seen Japan rise from literally ashes to become the world’s second-biggest economy in only two decades … (read more)