Hiroshi Ishiguro wants his robots to look as human as possible—but does that just end up confusing people?

As robots get good at mimicking human behavior, people can be deceived into thinking they have human intelligence. So let’s put them to the test.

Angelica Lim writes:  A few years ago I met a robot in a Japanese-style café in Osaka. She wore a traditional kimono and greeted me from where she sat in the corner of the dim room. She took my order and called it out to the barista at the bar: “One tea!”

But I knew she wasn’t doing it on her own—the robot understood nothing. Somewhere upstairs, I knew, must be the human controlling this hyper-realistic android. Researchers call it the “Wizard of Oz” technique—controlling a robot from a distance, perhaps fooling an unsuspecting passerby into thinking that the mechanical creature itself is alive. The tele-operated Geminoids from Hiroshi Ishiguro’s laboratory, like the one I met at the café, are perfect examples of these superbly crafted silicon marionettes.

Hiroshi Ishiguro wants his robots to look as human as possible—but does that just end up confusing people?

Today’s AIs, much like the robot I encountered in Osaka, are “weak”—they don’t have any real understanding. Instead, they are powered by giant rulebooks containing massive quantities of data stored on the Internet. They can act intelligent but can’t understand the true meaning of what they say or do. 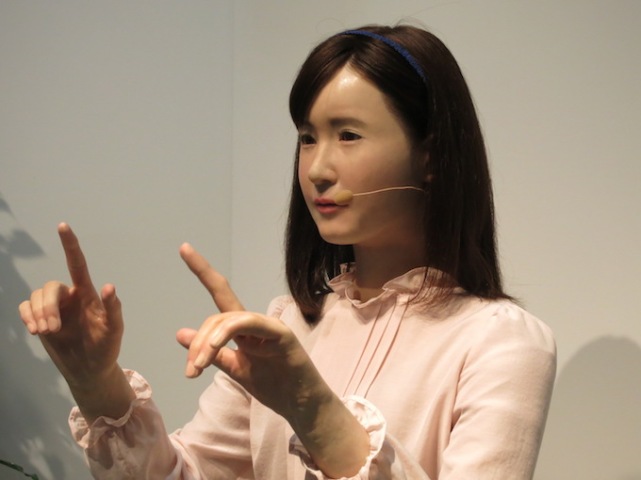 People tend to think the robots are smarter than they really are. In a recent study by universities in Italy and Australia, researchers showed that people attribute mental experience and agency to robots, simply on the basis of their appearance. This sort of projection may be behind the unfortunate wording of popular news articles suggesting, for instance, that robots want to “take over the world” or that we may be in for a “robot uprising.” This is misleading and confusing, and when people are confused, they get scared. And fear has a way of hindering progress.

It would help if we had a sort of “robot Turing test” to measure how smart the robots really are. You might create such a test using the original Turing test as a guide. First published in 1950 by Alan Turing, the test was conceived as a way to measure the progress of artificial intelligence with the technology of the time: computer terminals and keyboards. A person communicates with an unknown being via text on the screen and must guess whether the typed responses are being written by a human or software. The more often the AI is mistaken for a human, the better it is.

Today’s software chatbots would do well on that kind of test. Dating sites use these artificially intelligent bots to fool people into thinking a real person is flirting with them. The chatbots are so good that there are websites listing strategies to fool them into revealing their true nature. (Hint: try sarcasm.)

Does that mean that robots are close to passing the Turing test, too? Could we simply pop a software chatbot into a robot and be done with it? The answer is no, for many reasons. Factors such as human-like gaze, blinking, gestures, vocal tone, and other emotional expressions must be varied and natural, and timed together perfectly. It would be strange, for example, if the robot never broke eye contact with you … (read more)