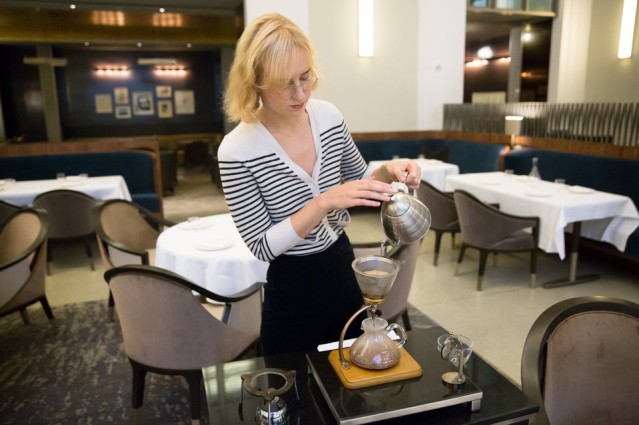 NEW YORK— Charles Passy reports: In this hyper-caffeinated city, you don’t have to venture far to find an affordable cup of coffee, be it from a corner bodega or pushcart vendor.

Maya Albert, the restaurant’s coffee director, spends about 10 minutes preparing the beverage tableside. She uses her Silverton “dripper,” a brewing apparatus that resembles something out of a chemistry lab. She carefully times each of the three stages of the process, including the all-important “bloom” period when the ground beans first make contact with the hot water.

The coffee is a rare variety called Wush Wush, sourced from a small farm in Colombia. Eleven Madison Park charges $48 for 10 ounces of the coffee, but two people can share the offering and perhaps eke out a tiny refill or two.

“It’s got this creamy texture that reminds me of dough or yogurt,” Ms. Albert said of the coffee. As for the flavor: “It’s blueberry pie.”

Competition in the world of wallet-busting coffee is heating up. Many Americans have long moved past the ho-hum cup—first embracing the higher-end brews offered by Starbucks and now enjoying what is called the “third wave” in coffee, with emphasis on farm-to-table sourcing and alternative brew methods.

Earlier this year, Extraction Lab, a coffee shop in Brooklyn, N.Y., that is connected to Alpha Dominche, a manufacturer of brewing equipment, began selling an $18 cup of coffee. It is made using a $13,900 Alpha machine that controls every aspect, from water temperature to timing.

[Read the full story here, at the WSJ]

The brew is a Panamanian-sourced variety, called Gesha, sometimes spelled Geisha, once described by Don Holly, a veteran of the gourmet-coffee industry, as seeing “the face of God in a cup.”

In Southern California, $55 is what it will cost to get a special cup at Klatch Coffee, which plans to roll out a particularly prized version next month, dubbed Esmeralda Geisha 601. The “601” refers to the price per pound that the coffee sold for at auction.

The store is set to offer it at ticketed events. But for those who can’t attend, Klatch will ship the coffee out—for the same $55—in 15-gram packages of pre-roasted beans, good for making one cup. A souvenir mug will come with mail orders. 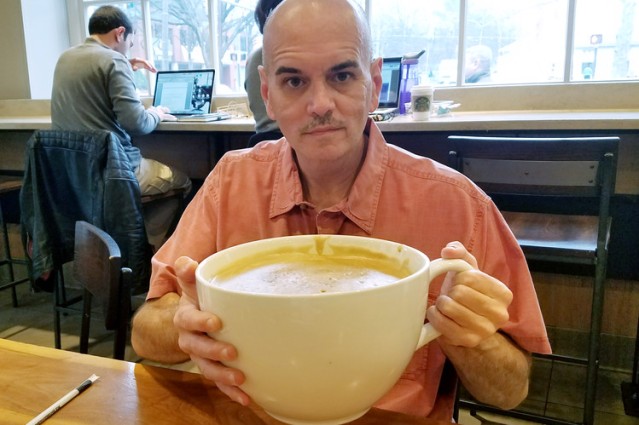 Klatch owner Mike Perry said he picks up everything from berries to stone fruit to “notes of jasmine” with each sip. As with other exclusive varieties, he doesn’t dare suggest adding milk or sugar.

Devoción, the coffee supplier that provides Wush Wush to Eleven Madison Park exclusively, has other hard-to-find varieties it sells at its Brooklyn store—for as much as $100 a pound. The store refers to them as its “grand cru” coffees, borrowing a term from the wine world used to denote the best vineyards.

Simon Kopec, a 27-year-old New Yorker who shops regularly at Devoción, makes the point that high-end coffee is more affordable per serving than, say, caviar or fine wine. But he also admits he is in it for the bragging rights.

“I want to have that connoisseur badge of sorts amongst my friends,” said Mr. Kopec, who served about $50 of Gesha coffee at a recent dinner party, following a meal highlighted by cheese soufflé and a fondue dish of meat cooked in hot oil … (read more)