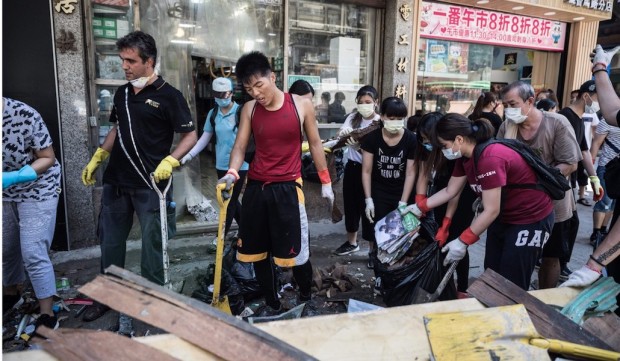 Macau suffered an economic loss of 11.47 billion patacas (about US$1.42 billion), with small and medium enterprises alone reporting losses of 3.63 billion patacas, after the city took a major hit from Typhoon Hato last month.

The deadly storm claimed at least 10 lives in the former Portuguese enclave, leaving almost half of the city without water and electricity, and bringing businesses and public transport to a standstill.

Macau Chief Executive Fernando Chui Sai-on, who led department heads to report the latest on post-typhoon relief work at a press conference on Wednesday, said the direct economic cost of Hato was estimated at 8.31 billion patacas, while his government put the estimate of indirect cost at 3.16 billion patacas.

Chui said these were initial estimates as some of the casino hub’s economic activities had not fully recovered.

In Hong Kong, market analysts put the economic cost of Hato to the city at anywhere between HK$4 billion (about US$513 million) and HK$8 billion.

Macau Secretary for Economy and Finance Lionel Leong Vai-tac remained cautiously optimistic about the overall economic outlook, saying the trend would be “heading toward a mild and stable development” for the rest of the year.

Citing official data, Leong said that as of Tuesday, the government had received 10,544 applications from small and medium firms for special government subsidies to tide them over the imminent hardship.