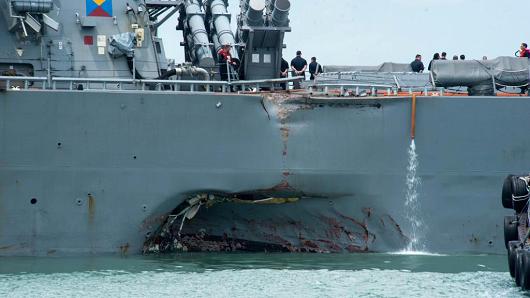 U.S. Navy | Getty Images
Damage to the port side is visible as the guided missile destroyer USS John S. McCain steers toward Changi Naval Base, Republic of Singapore.

Huileng Tan reports: U.S. Navy ships have been involved in four accidents in Asian waters this year, including three collisions and one ship that ran aground.

“The two severe collisions within two months show that the U.S. Navy’s combat readiness level and military management level have both declined,” said the Global Times.

The newspaper added, however, that the “missing and injured U.S. sailors deserve sympathy.”

Commentaries in state Chinese media are widely followed for insight into government thinking.

The Global Times said the U.S. Pacific Command is not working to avoid collisions in the South China Sea. “Its activities only aim at putting China in check,” the editorial said.

“U.S. warships are constantly involved in accidents around the South China Sea. On the one hand, the U.S. Navy has behaved arrogantly in the Asia-Pacific region. It lacks respect for huge merchant ships and fails to take evasive action in time, thus resulting in serious accidents,” it added … (read more)