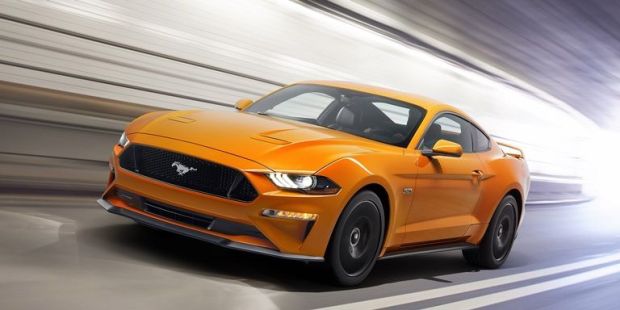 When equipped with a 10-speed auto and the Performance Package, the new Mustang GT is seriously quick.

Chris Perkins writes: Shortly after it debuted in January, we guessed that the updated-for-2018 Mustang GT would offer 455 hp. Unfortunately we were wrong. Ford announced today that the 2018 GT actually makes 460 hp and 420 lb-ft of torque, and impressively, runs from 0-60 mph in under 4.0 seconds. Sounds good to us.

To achieve that acceleration figure, you’ll have to order your Mustang GT with Ford’s new 10-speed automatic—the same one used in the F-150 Raptor—and the Performance Package. The GT actually gets a new Drag Strip mode, which optimizes the transmission for straight-line performance.

“In Drag Strip mode, the engine torque doesn’t drop when you’re shifting,” said Mustang chief engineer Gene Widmann in a statement. “You get peak engine torque and horsepower straight through.”

Drag Strip mode is available on manual-transmission Mustangs too, but if you’re looking for the quickest acceleration, get the automatic. In Performance-pack equipped GTs, Drag Strip mode also changes the settings of the car’s MagneRide dampers, helping increase weight transfer to the rear axle, providing greater traction.

The 2019 Mustang EcoBoost also gets Drag Strip mode, and a torque increase from 320 lb-ft to 350 lb-ft, but power output remains unchanged at 310 hp. When equipped with the 10-speed automatic and the Performance package, the EcoBoost will run to 60 mph in under 5.0 seconds … (read more)