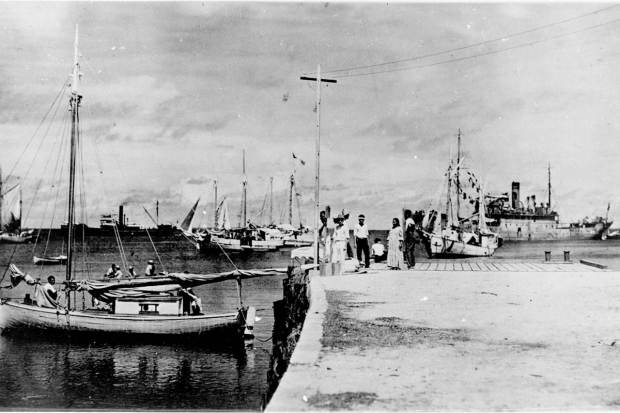 Tom Costello and Daniel Arkin report: A newly discovered photograph suggests legendary aviator Amelia Earhart, who vanished 80 years ago on a round-the-world flight, survived a crash-landing in the Marshall Islands.

The photo, found in a long-forgotten file in the National Archives, shows a woman who resembles Earhart and a man who appears to be her navigator, Fred Noonan, on a dock. The discovery is featured in a new History channel special, “Amelia Earhart: The Lost Evidence,” that airs Sunday.

Independent analysts told History the photo appears legitimate and undoctored. Shawn Henry, former executive assistant director for the FBI and an NBC News analyst, has studied the photo and feels confident it shows the famed pilot and her navigator.

Amelia Earhart mystery may have new clue in never-before-seen photo 6:25
“When you pull out, and when you see the analysis that’s been done, I think it leaves no doubt to the viewers that that’s Amelia Earhart and Fred Noonan,” Henry told NBC News.

Earhart was last heard from on July 2, 1937, as she attempted to become the first woman pilot to circumnavigate the globe. She was declared dead two years later after the U.S. concluded she had crashed somewhere in the Pacific Ocean, and her remains were never found. 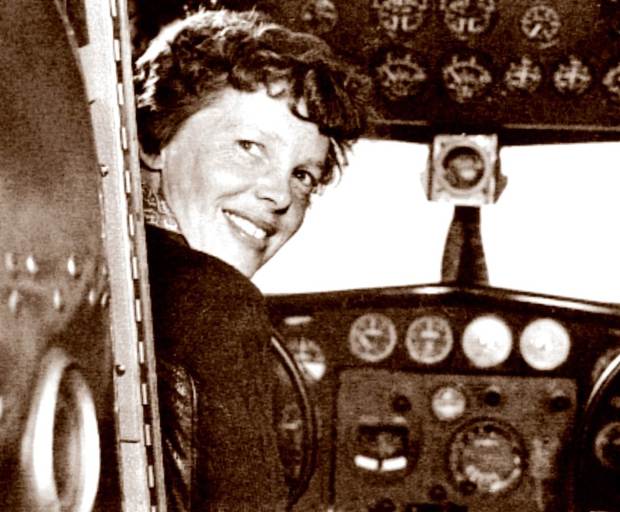 Amelia Earhart sits in her Electra plane cabin at the airport in Burbank, California, on May 20, 1937. Albert Bresnik / Paragon Agency via AP

But investigators believe they have found evidence Earhart and Noonan were blown off course but survived the ordeal. The investigative team behind the History special believes the photo may have been taken by someone who was spying for the U.S. on Japanese military activity in the Pacific.

Les Kinney, a retired government investigator who has spent 15 years looking for Earhart clues, said the photo “clearly indicates that Earhart was captured by the Japanese.”

Japanese authorities told NBC News they have no record of Earhart being in their custody. 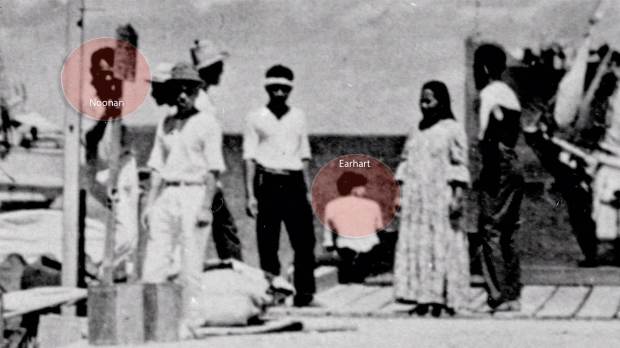 A newly discovered photo shows a woman who resembles Amelia Earhart and a man who appears to be her navigator, Fred Noonan. National Archives

The photo, marked “Jaluit Atoll” and believed to have been taken in 1937, shows a short-haired woman — potentially Earhart — on a dock with her back to the camera. (She’s wearing pants, something for which Earhart was known.) She sits near a standing man who looks like Noonan — down to the hairline.

“The hairline is the most distinctive characteristic,” said Ken Gibson, a facial recognition expert who studied the image. “It’s a very sharp receding hairline. The nose is very prominent.”

The photo shows a Japanese ship, Koshu, towing a barge with something that appears to be 38-feet-long — the same length as Earhart’s plane … (read more) 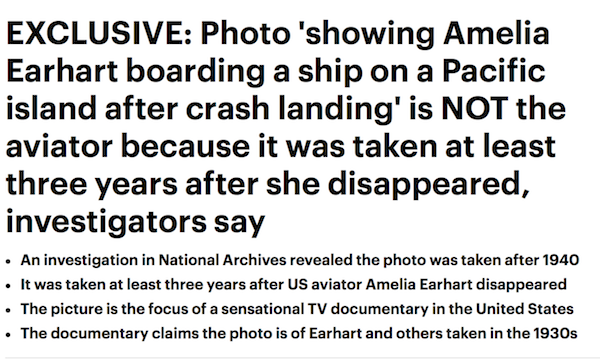 Richard Shears reports: A photo of a woman claimed to be missing US aviator Amelia Earhart is said today to be proof that she survived a crash into the Pacific Ocean 80 years ago – but the picture has a major flaw, it can be revealed.

The picture showing a group of people – allegedly showing Miss Earhart and navigator Fred Noonan – on a jetty on a Pacific island back in 1937 is the focus of a sensational TV documentary now being shown in the United States.

But MailOnline had access to this same picture a year ago – and an investigation in the US National Archives established that the photo was among a batch taken after 1940, at least three years after she disappeared … (read more)