A man walked on a passageway connecting two buildings behind a display of Chinese and local flags in Hong Kong on June 27. On July 1, Hong Kong will observe the 20-year anniversary of its return to Chinese sovereignty. ANTHONY WALLACE/AGENCE FRANCE-PRESSE/GETTY IMAGES

Mainland arrivals like new freedoms and try to blend in 20 years after handover.

HONG KONG — John Lyons and Chester Yung report: In the two decades since Britain returned Hong Kong to China, a wave of mainland Chinese immigrants has flooded the former colony, deepening fears that local values—from free markets to the Cantonese language and even basic politeness—will get washed away in a tide of “mainlandization.”

But in the teeming immigrant enclaves on Hong Kong’s outskirts, the process under way can sometimes seem more like the “Hong Kongization” of mainlanders than the other way around. Many Mandarin-speaking newcomers say they relish the freedoms of their new home. and are embracing its ways.

“You get influenced by the people around you,” said Lucy Pun, a 45-year-old who left China seven years ago for Tin Shui Wai, a dense cluster of apartment towers near Hong Kong’s border with China. Ms. Pun, who works at a shopping mall, speaks Cantonese now and uses a Hong Kong-sounding name. 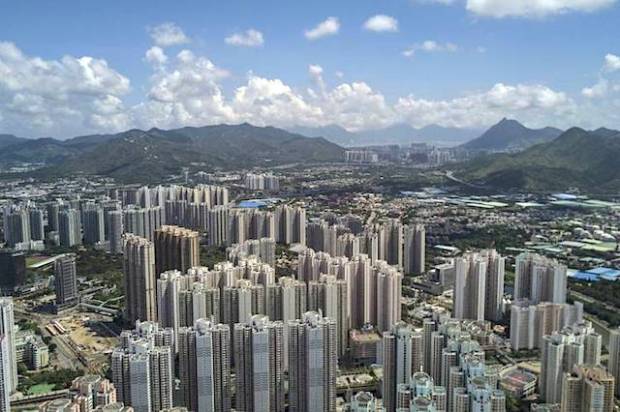 Tin Shui Wai in northern Hong Kong earlier in June. The area is popular with migrants from the mainland. PHOTO: ZUMA PRESS

Her experience shows how Hong Kong’s identity might persist even as Beijing imposes its will. Preserving values grounded in the rule of law is crucial for the city if it hopes to push back, opposition figures say.

“Hong Kong and China have a divergent history when it comes to culture and values,” says Joshua Wong, the 20-year old activist who helped lead mass pro-democracy protests in 2014. “What makes Hong Kong unique is its rule of law, its Cantonese and other traditions.”

Though Hong Kong is technically still a semiautonomous region, China is asserting its sovereignty. A visit by Chinese leader Xi Jinping for the July 1 anniversary of the handover is gearing up to be a celebration of mainland might. China’s one operational aircraft carrier will dock in Victoria Harbour for the first time; fireworks will depict Chinese characters in the streamlined style of the mainland rather than using Hong Kong’s more ornate forms.

Late Wednesday, police detained Mr. Wong and other activists who had been protesting Mr. Xi’s arrival with a sit-in at an iconic Hong Kong monument.

Chinese authorities have meddled in elections and use the nation’s wealth to influence economic decisions. Chinese agents have secreted Hong Kong residents to mainland detention centers. The pro-democracy movement has been muted by prosecutions.

Hong Kong’s incoming leader, Carrie Lam, who takes office during the festivities on Saturday, is under pressure from Beijing to introduce an anti-sedition law and a pro-China school curriculum—initiatives that were dropped in the past after they sparked protests.

But immigrant families leaving the authoritarian mainland can be more protective of Hong Kong’s freer ways. At least two leaders of Hong Kong’s student protest movement were born north of the border.

“Hong Kong people are not going to accept the values of the Chinese government,” said Nathan Law, a 23-year-old activist who helped lead the 2014 democracy protestsand whose family moved from the mainland when he was a child. Mr. Law was also among the activists arrested late Wednesday … (read more)

Write to John Lyons at john.lyons@wsj.com and Chester Yung at chester.yung@wsj.com