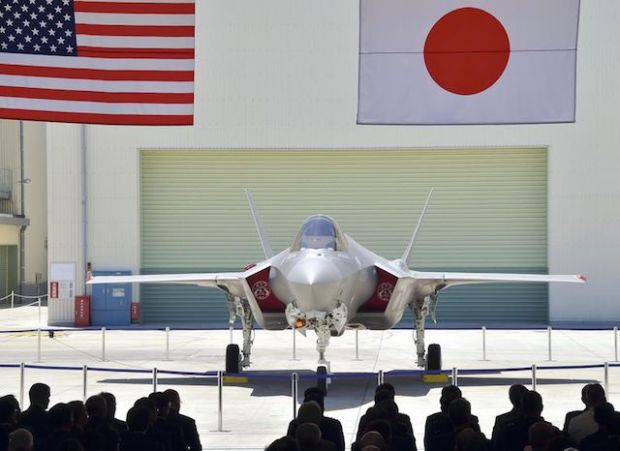 The government is considering equipping cutting-edge F-35 stealth fighters with air-to-surface missiles, which are capable of striking remote targets on land, and plans to deploy these fighters to the Air Self-Defense Force, The Yomiuri Shimbun has learned.

It will become the first introduction of such missiles for the Self-Defense Forces. The government hopes to allocate relevant expenses in the fiscal 2018 budget, according to sources close to the government. The main purpose of the introduction is to prepare for emergencies on remote Japanese islands, while some experts believe the government is also eyeing possession of the capability of attacking targets such as enemy bases for the purpose of defending the country.

According to the sources, F-35 fighter jets that will replace the ASDF’s F-4 fighter aircraft are employed by U.S. forces and others. The F-35 aircraft has an advanced stealth capability that makes the aircraft less visible on enemy radar. The ASDF plans to introduce a total of 42 units of the F-35 and gradually deploy them to the Misawa Air Base in Aomori Prefecture starting at the end of this fiscal year. The government is considering introducing some additional capabilities for the aircraft.

The most likely option the government is currently focusing on is the Joint Strike Missile (JSM) that is being developed mainly by Norway, which also participated in an international project to develop the F-35. The ASDF currently has no air-to-surface missile capabilities, but the JSM has both air-to-ship and air-to-surface capabilities, with an estimated range of about 300 kilometers.

The Defense Ministry is building up national defense systems to defend remote islands, such as the Nansei Islands. In addition to deploying new Osprey transport aircraft to the Ground Self-Defense Force, the ministry plans to create an amphibious rapid deployment brigade, similar to other nations’ marines.

As an air-to-surface missile has a long range, it is possible to effectively strike a target from safe airspace. For this to be possible, the ministry decided it was necessary to consider introducing the JSM to prepare for situations such as preventing foreign military vessels from approaching remote islands or the SDF launching an operation to regain control of an occupied island.

Meanwhile, if the F-35 aircraft with an advanced stealth capability is equipped with long-range air-to-surface missiles, it will effectively be possible to use the F-35 to attack bases in foreign countries.