“We have no projections about what’s ahead except to say that this is being embraced by China in that 50 percent visiting are actually coming from outside the Shanghai region,” said Iger, who is in Shanghai to mark the occasion.

Iger said the company has projected that two-thirds of visitors would come from the Shanghai region, but with half of all visitors coming from outside the region, it suggests that word is getting around and that word of mouth is positive. “It’s a positive sign,” he said.

In the early morning Friday, the head of the Walt Disney along with other key executives had greeted the first guests of the day — some 600 loyal and frequent Disney customers. 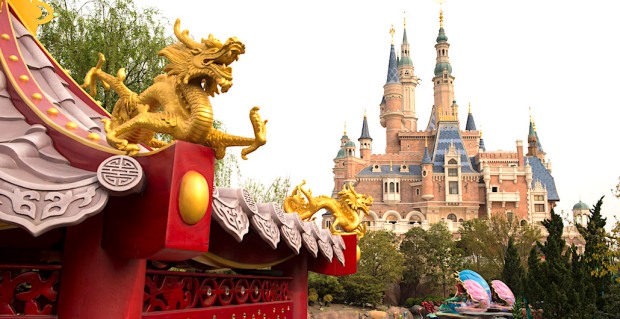 Shanghai Disneyland is very much a part of Iger’s legacy at the company. He spent 17 years to build the $5.5 billion theme park in China — and even signed the golden peony that sits atop the Disney castle, the world’s largest.

At 11 million visitors, Shanghai would rank in the middle of Disney’s parks, slightly outperforming Disney’s park in Paris. According to an independent report by the TEA/AECOM Theme Index and Museum Index, the U.S. parks see more visitors, Hong Kong significantly less.

The project is meant to boost Disney’s brand in a country where average people haven’t grown up with characters such as Mickey Mouse in the same way their American counterparts have. It was seen as an important step for Disney, not just for the theme park business but for the company as a whole. The idea was to use the park as a platform to market Disney’s characters and movies to the Chinese consumer, and to get children and families here excited about them.

Iger said it is still early days to fully understand the impact the park is having on its China business though he said the movies have been successful in the country, including the … (read more)