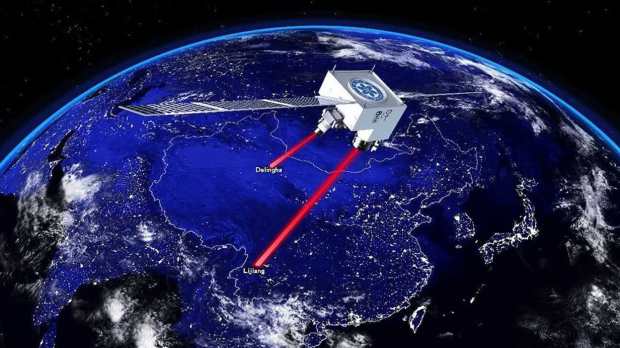 Michael Irving reports: Chinese scientists have smashed the quantum entanglement distance record. Transmitting information through entangled photons had previously only been possible up to about 100 km (62 mi), but using the Micius satellite launched in August, information has effectively been teleported as far as 1,200 km (746 mi).

“It will be like tossing a coin from a plane at 100,000 meters above the sea level exactly into the slot of a rotating piggy bank.”

Quantum entanglement is a phenomenon so bizarre that even Einstein argued against its existence, famously referring to it as “spooky action at a distance.” Pairs of particles can be inextricably linked, so that the state of one can be inferred from the other, no matter how far apart they may be. Essentially, this process can be used to instantly “teleport” information between them over theoretically infinite distances, which was Einstein’s issue with the idea: it violated the law of general relativity that says nothing can travel faster than the speed of light.

As useful as it might someday be, quantum effects are very sensitive to interference from the environment. Previous experiments encased the photons in an optical fiber to protect them, passing the message down the line from particle to particle. This method was used to set the previous record of 100 km, but the longer the distance, the higher the chance that the message will be lost or distorted.

Launched by the Quantum Experiments at Space Scale (QUESS) program, the Micius satellite was the first step towards building a global quantum communication network. Instead of physical fibers, the system sends entangled photons via laser beams, and although that can help minimize interference, lining up the source and the receiver brings its own challenges – especially when the satellite is moving so fast … (read more)

Source: American Association for the Advancement of Science