The vehicle was unveiled in the city of Zhuzhou on June 2nd (Credit: CRRC Zhuzhou Institute Co Ltd)

Ben Coxworth reports: According to China’s CRRC Zhuzhou Institute Co Ltd, most smaller cities can’t afford to build light rail systems – even though they would still benefit from having them. That’s why the company has built and demonstrated what it’s billing as “the world’s first railless train.” The articulated electric vehicle runs along regular asphalt roads, using rubber tires instead of steel wheels.

The ART (Autonomous Rail Rapid Transit) measures about 9 meters long (30 ft), has a top speed of 70 km/h (43.5 mph), and a range of 40 km (25 miles) per charge of its battery system. It can carry up to 300 passengers in its current three-car configuration – so we’re told – although that figure could reportedly be boosted to 500 by adding an extra couple of cars. 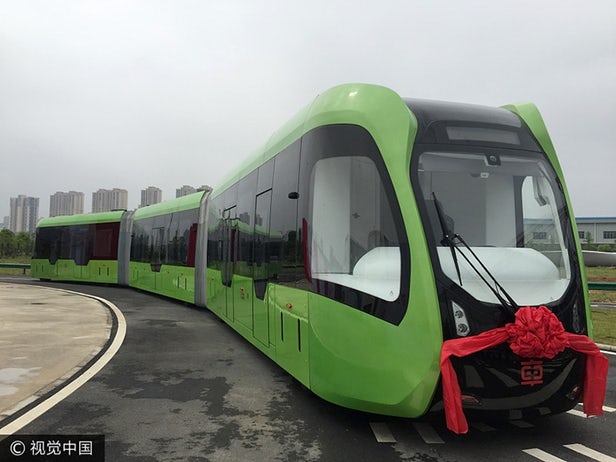 While some of the photos make it look like the ART automatically follows lines painted on the road, CRRC simply states that the train is “equipped with sensors that can read the dimensions of roads and plan its own route.” … (read more)