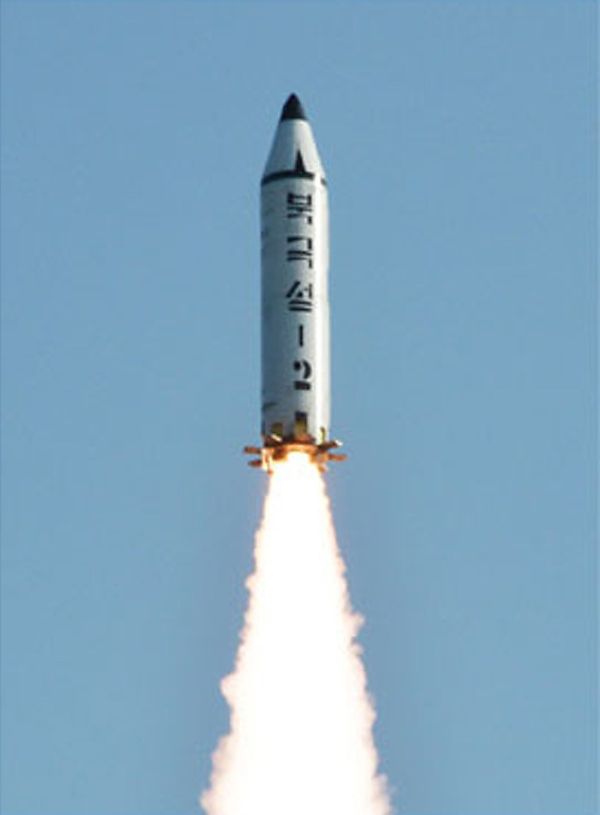 This photo taken from the website of the Rodong Shinmun, the official newspaper of the Workers’ Party of Korea, shows the launch of a ballistic missile on Sunday. Jiji Press

SEOUL (Reuters) — North Korea said on Monday it had successfully tested an intermediate-range ballistic missile which met all technical requirements and could now be mass-produced, indicating advances in its ambitions to be able to hit the United States.

North Korea’s official Korean Central News Agency said leader Kim Jong Un supervised the test which also verified the functioning of the solid-fuel engine for the Pukguksong-2 missile and ordered it for deployment in field action.

North Korea has defied all calls to rein in its nuclear and missile programs, even from China, its lone major ally, saying the weapons are needed for legitimate self-defense. The North last conducted a ballistic missile test a week ago.

“Saying with pride that the missile’s rate of hits is very accurate and Pukguksong-2 is a successful strategic weapon, he approved the deployment of this weapon system for action,” KCNA said, quoting leader Kim Jong Un.

The launch verified the reliability and accuracy of the solid-fuel engine’s operation and stage separation and the late-stage guidance of the nuclear warhead which was recorded by a device mounted on the warhead, KCNA said.

“Viewing the images of the Earth being sent real-time from the camera mounted on the ballistic missile, Supreme leader Kim Jong Un said it feels grand to look at the Earth from the rocket we launched and the entire world looks so beautiful,” KCNA said.

The use of solid fuel presents great advantages for weapons because the fuel is more stable and can be transported easily in the missile’s tank allowing for a launch on very short notice.

The Pukguksong-2 missile flew about 500 kilometers, reaching an altitude of 560 kilometers, and landed in waters off the North Korea’s east coast, South Korea’s military said Sunday.

On Monday, the South Korean military said the test provided more “meaningful data” for the North’s missile program but whether the North mastered the re-entry technology for the warhead needs additional analysis to verify the North’s claims of advances.

The reclusive state has been working to develop a nuclear-tipped missile capable of striking the U.S. mainland. On Saturday, it said it had developed the capability to strike the U.S. mainland, although Western missile experts say the claim is exaggerated.

The North has yet to demonstrate it has successfully miniaturised a nuclear warhead to mount on a ballistic missile despite claims to having mastered the technology.

On Monday, KCNA said the latest test follows the successful test last week of another missile that has put Hawaii and Alaska within range.