The South Korean news agency Yonhap reported that the object appeared to be a ballistic missile but the nature of the launch was not immediately clear.

Jonathan Cheng reports: North Korea fired what appeared to be a new type of ballistic missile Sunday, days after the election of a new South Korean president who advocates more engagement with Pyongyang.

The missile rose to a height of about 1,240 miles, Japanese Defense Minister Tomomi Inada said, a much steeper trajectory than usual for a North Korean missile test. She said officials were looking into the possibility that it was a “new type of ballistic missile.”

Yoshihide Suga, Japan’s chief cabinet secretary, said the missile traveled for about 30 minutes and landed some 500 miles east of the launch site. A spokesman for South Korea’s Joint Chiefs of Staff estimated the distance at 435 miles. 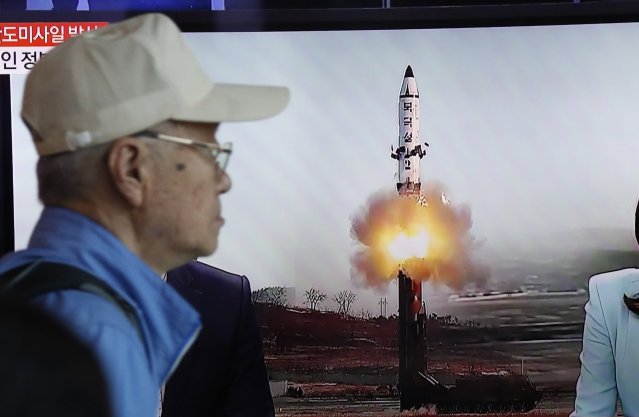 Maj. Rob Shuford, a spokesman for U.S. Pacific Command in Hawaii, said the launch didn’t appear to be consistent with that of an intercontinental ballistic missile.

Independent experts said the missile, if fired at a conventional angle, could have flown 2,800 miles—far enough to reach the U.S. military base in Guam. That is a “considerably longer range than its current missiles,” said David Wright, co-director of the Global Security Program at the Union of Concerned Scientists, in an analysis of the launch.

While North Korea’s Taepodong-2 ballistic rocket has flown farther than Sunday’s missile, North Korea classifies it as a satellite launcher that isn’t designed to deliver a warhead back to earth. It is, however, banned by United Nations sanctions because similar technology could be used to make an intercontinental ballistic missile.

The latest launch comes as worries intensify in the international community about North Korea’s nuclear ambitions. Leader Kim Jong Un indicated in January that he seeks to develop an ICBM capable of delivering a nuclear warhead to the continental U.S., and North Korea has stepped up its missile tests since then. North Korea has test-launched missiles 10 times this year.

Moon Jae-in, South Korea’s newly elected president, convened an emergency meeting of the National Security Council hours after Sunday’s launch, according to a spokesman for the presidential Blue House in Seoul.

During the meeting, Mr. Moon condemned the missile launch as “a grave violation of U.N. Security Council resolutions” and expressed frustration at the North for testing a missile just days after Mr. Moon had said in his inaugural address that he would do whatever it takes to establish peace on the Korean Peninsula, according to the spokesman … (more)