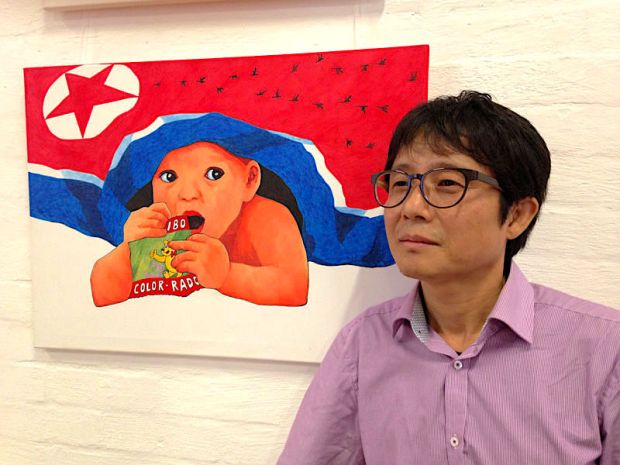 Growing up, Song says he revered North Korean founder Kim Il Sung as a god, and was “100 percent” loyal to his son and successor Kim Jong Il.

“I really believed we were the happiest people [in the world] because we had been brainwashed since childhood,” he told the Thomson Reuters Foundation in London where he is showing his paintings.

The turning point came when Song was sent to a labor camp, which he likened to the concentration camps of World War II.

In the mid to late 1990s, North Korea was hit by a devastating famine which killed hundreds of thousands of people.

As his family grew weak from hunger, Song and his father decided to cross the Tumen river to China to find food to bring back.

When his father was swept away Song asked two border guards to help look for his body. He was immediately arrested and tortured.

His six months in labor camp nearly killed him, but also opened his eyes.

“They treated prisoners like animals, not as human beings. I saw many of my friends die,” Song said through an interpreter.

“In the morning I didn’t even want to open my eyes, I wanted to die,” he added. “When I heard birds singing I envied them their freedom.”

Months of hard labor and minimal food left him so ill that the guards believed he was about to die and let him go.

He was a “walking skeleton” when he turned up at his uncle’s home. His family did not even recognize him.

His right index finger had to be amputated because of an injury sustained during hard labor, and he since had to relearn how to paint.

In 2001, having recovered his health, Song decided to escape North Korea. This time he carried poison with him so he could commit suicide if caught … (read more)