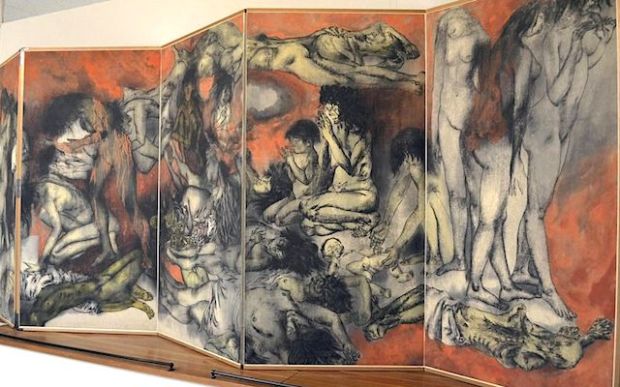 “The Hiroshima Panels,” a series of folding screens depicting the aftermath of the atomic bombing of Hiroshima and Nagasaki and other scenes, have been suffering from increasingly severe insect damage in recent years, so the gallery housing them hopes to raise ¥500 million to build an annex on the grounds that can prevent further damage.

The Maruki Gallery For The Hiroshima Panels in Higashimatsuyama, Saitama Prefecture, exhibits most of the internationally renowned works. The gallery was founded by Iri and Toshi Maruki, the couple who painted the panels. They opened the gallery in 1967 using their own money, donations and other funding.

Fourteen of the work’s 15 panels are on display at the gallery, with the remaining one, which depicts damage to Nagasaki, donated to the Nagasaki Atomic Bomb Museum.

The Hiroshima Panels are the work of Iri Maruki (1901-95), a sumi ink painter, and his wife Toshi (1912-2000), an oil painter. They spent about a month in Hiroshima after the atomic bombing making sketches, speaking to people and gathering other information, which they then based their work on. They used techniques such as adding sumi ink to oil paint in creating the panels, which took them 32 years to complete. Each panel is 1.8 meters tall and 7.2 meters long. Scenes such as a mother holding her dead baby are depicted.

The panels are not kept behind glass because the couple wanted people “to see the horror of war up close.” This allows visitors to examine the work in detail.

However, insects have gradually eaten away at the panels over the last several years, leaving white spots about a centimeter in diameter.

Damage now affects all 14 of the gallery’s panels, and high temperatures have meant the surface has started to crack in some areas. … (read more)