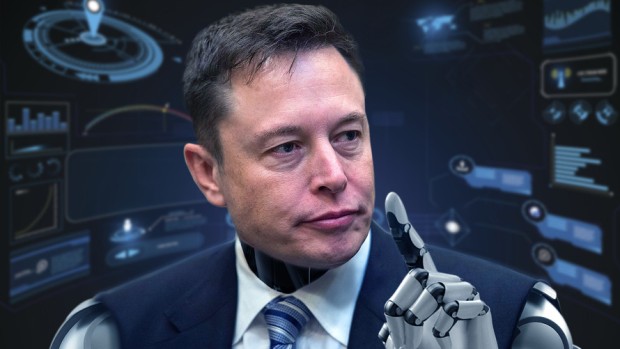 Elon Musk thinks his robot software can make Tesla Inc. worth as much as Apple Inc. He has the chance to prove it very soon.

Jeremy C. Owens writes: In three different facilities spread across America, Tesla’s TSLA, -5.15%  robot-manufacturing prowess is about to show its worth. If Musk — who, to his credit, is building rockets that can land already — can accomplish his accelerated ambitions for automated manufacturing, Tesla would at least own a piece of the pipeline over Apple AAPL, -0.35%  .

Musk said in 2015 that Tesla could achieve a $700 billion market cap in 10 years, and he prefaced his reiteration Wednesday with, “I may be completely delusional.” When an analyst asked Musk to update his bold statement in an earnings call, the CEO said it would “heavily involve Tesla going at the machine that builds the machine.”

“Which involves, by the way, a tremendous amount of software,” he explained. “This is not just a bunch of robots that are sitting there. It’s programming of the robots and how they interact. And it’s far more complex than the software in the car.”

Musk is referencing the advanced machines that will produce the Tesla Model 3 and the batteries for it, an audacious attempt at becoming a major American manufacturer in a short time. Along with solar-panel manufacturing adopted in the SolarCity merger, Tesla is rolling out three new production lines in the coming months, planned for peak performance.

The former NUMMI factory in Fremont, Calif., has undergone a rebuild and is projected to go from its current pace of building 100,000 cars a year to one that, by the end of 2018, could build 500,000 annually. Musk promised the aggressive schedule after receiving 373,000 reservations with a $1,000 deposit for the Model 3, which is expected to begin production in July as of now.

The Model 3 is a lower-budget version of the Model S, and a main reason Tesla can afford to drop the price is the plans to manufacture its own batteries at the “Gigafactory” near Reno, Nev. The company said Tuesday that manufacturing machines, presumably with Tesla’s special-sauce software, are being installed in the facility, which Musk has said will exceed previous global lithium-ion battery production.

The building itself is so large, it even boggles Musk’s brain.

Some Gigafactory batteries are also going to the Tesla Energy business, which got much bigger late last year when SolarCity was added. That merger also brought an in-progress solar-panel manufacturing facility near Buffalo, New York, which is now called Gigafactory 2.

Tesla’s solar roof is supposed to be manufactured there after a test run in Fremont this quarter, and Tesla says Gigafactory 2 will eventually make up to 10,000 solar panels a day. Those panels will go to residential customers, who can now … (read more)