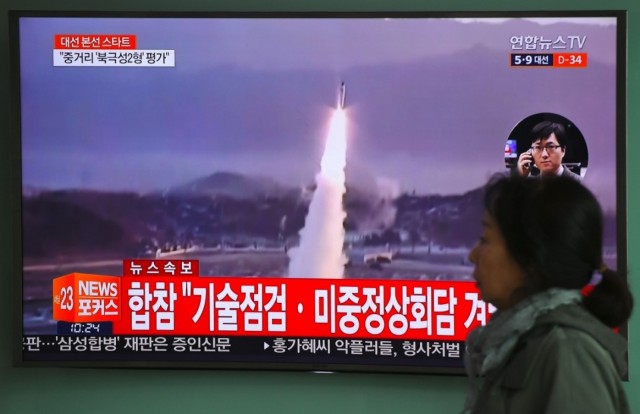 A woman walks past a television screen showing file footage of a North Korean missile launch, at a railway station in Seoul. (AFP/Getty Images)

The prime minister’s office issued new “actions to protect yourself” guidelines this week, including for the first time instructions on how to respond if a North Korean ballistic missile is heading toward Japan.

Three of the four missiles that North Korea launched March 6 fell within Japan’s exclusive economic zone in the Sea of Japan, the body of water that separates Japan and the Korean Peninsula. North Korea later said that it was practicing to hit U.S. military bases in Japan.

North Korea showed almost two decades ago that it has all of Japan in its reach. In 1998, North Korea fired a Taepodong-1 missile — ostensibly for launching a satellite — over Japan and into its economic zone on the Pacific Ocean side.

The Japanese government’s advice isn’t exactly helpful, amounting to basically: You won’t get the warning in time, but if you do, then go to a strong building.

This is the Japanese government’s advice for what to do if a North Korean missile is coming straight at you https://t.co/2YpgLsLmji pic.twitter.com/7dmYDHpnCl

As North Korea has issued threats and paraded missiles this month, Japan’s official civil defense website has had 5.7 million visitors in the first 23 days of April — compared with usual monthly traffic of less than 400,000 hits.

Under the “frequently asked questions” section, the government poses the question of how many minutes it would take for a missile to reach Japan.

“When a missile is launched from North Korea, it will not take long to reach Japan,” the answer reads. “For example, the ballistic missile launched from [North Korea] on February 7 last year took 10 minutes to fly over Okinawa.”

North Korea conducted a live-fire artillery drill to mark the founding of the country’s army on April 25. The White House plans to host a private briefing on North Korea for the U.S. Senate amid growing concern over Pyongyang’s nuclear program. (Reuters)

The central government has also been holding meetings to instruct local governments what they should do if a North Korean missile hits their region.