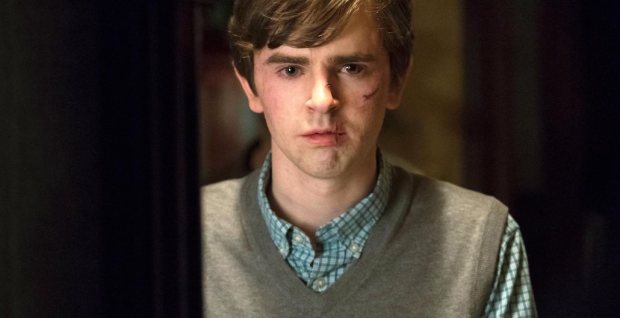 Jodi Walker writes: Let me tell you what: When it comes to Bates Motel, the future is certainly not mine to see. In its final season, Bates Motel proved over and over again that it is one of the few series on television that can simultaneously subvert predictions, exceed expectations — of which there were many, given its inescapable source material — and make every shocking twist feel completely earned.

Before Dylan goes back into his mother’s former house to see his brother, who has officially lost any and all touch with reality, he calls his wife. He tells her that he has to go check on Norman alone; he can’t call the sheriff because she’ll kill him: “She doesn’t give a s— about Norman.” And that’s true. Dylan is the only person left in this world who gives one single s— about Norman Bates. Well, Dylan…

It doesn’t make him any less a murderer. But for Romero to have killed Norman, when the person he really needed to settle up with was Mother, would have made sense… but it would not have been particularly satisfying. Making Norman a sympathetic character was a narrative feat, but it was also a huge risk; a happy ending for Psycho’s Norman Bates is one twist that even this series could likely not pull off. Dylan weeps to Norman once they’ve truly come to the end, “What I really want is something that can never happen! I want you to be happy, and I want you to be well.” He now knows what we’ve known all along: There could be no happy ending for Norman. I guess I just assumed that meant there couldn’t be a truly satisfying end for Norman either … (read more)

Brian Tallerico writes: Series finales often feel desperate to please, rushing to a finish line in a way that leaves audiences dissatisfied. As they have so many times in the last two seasons of Bates Motel, which were easily the series’ best, the writers of this underrated program took their time in their final episode. They produced an hour that was more melancholy than action-packed, reminding us that this is a tragedy more than anything else. We saw how much Norman Bates (Freddie Highmore) has changed over the course of the show, and were reminded just how much has been lost. Think of the carnage left behind: Caleb, Chick, Romero, and both Norman and Norma Bates are dead. Ultimately, it is Dylan and Emma who escape, free to start their own family away from the nightmare of White Pine Bay.

It starts with a reminder of collateral damage. The office manager that Alex (Nestor Carbonell) kidnapped along with Norman Bates is crying. She’s understandably worried that an obviously unstable Alex is going to kill her, but he has enough remaining humanity to let her go before his final showdown with the stepson who killed the only woman he ever loved.

As Greene (Brooke Smith) gets every cop in the county after Alex and Norman, the pair get closer to their inevitable end game, set in the woods with the body of Norma Bates (Vera Farmiga). After battering Norman around a bit and pointing a gun at his head, they reach the spot in the woods where Norman left his mother. Alex is crushed to see his wife’s mummified body in the snow. Norman tries to apologize, and Alex just starts pummeling him. He lets up long enough to let Norman get the jump on him, smashing his stepfather with a rock. And then Norman grabs Alex’s gun and shoots him twice. Alex’s last words are crucial: “You killed your own mother. You can’t hide from it.” In many ways, that’s what this season has been about: a young man unable to hide from his horrible crime. Before the scene ends, Norman sees a vision of Norma, and she’s saying good-bye. Perhaps with Alex dead, she knows there’s no more need to protect him. Or she knows that her son is now too far gone to save.

What happens to a Norman Bates who no longer has Alex Romero coming after him and no longer has his mother speaking to him in his subconscious? He totally breaks from reality …. (read more)

Spoiler alert: Do not read until you’ve watched the series finale of “Bates Motel,” titled “The Cord.”

Debra Birnbaum writes: After five seasons of love, loss, and a few too many bodies, “Bates Motel” wrapped up its run with a heartbreaking finale. Mother and son were finally reunited — albeit tragically in death, when Dylan (Max Theriot) was forced to shoot Norman (Freddie Highmore) when he charged at him with a knife. At least Dylan got a happy ending, as we got a glimpse into a future where he, Emma (Olivia Cooke) and their daughter seemed to have put their painful past behind them.

Here, executive producers Carlton Cuse and Kerry Ehrin break down the road to the epic series-ender.

This finale was five years in its planning, given that you were able to set your own end date for the series. How are you feeling about it now?

Cuse: It’s always bittersweet. I think we got the chance to do what we set out to do. From very early on, we had this plan that the show should be five seasons, and we should bring it to its close, and we got to do that, which was really lucky. On the other hand, to not be working with everybody each day, it was an incredibly loving, well-connected group of people. Everybody was really so wonderful on the show. We had our on-screen tragic ending, and we had the off-screen tragic ending of not working with each other every day, and that’s hard.

Is this finale you always had in mind?

Ehrin: It’s the emotional destination we always had in mind from the beginning. How we got there and the structure of the last episode was very much found. But knowing where we wanted to land, that we wanted Norman to be returned to Norma, whether that means in his mind or in the earth, that seemed like the only ending.

Was it always going to be Dylan who would deliver him there?

Cuse: No, that idea came about later. We did know from the very beginning that the only ending that worked for us was that Norman would die and that Norman and Norma was this great romance and these were characters who were not fated to be able to live together in this world. They only could be reunited really in death. But the fact that Dylan ended up being a critical participant in that evolved later.

You always intended, too, to deviate from the movie “Psycho.”

Ehrin: We drove past “Psycho”.. once Romero gets Norman out of jail, because “Psycho” ends with him in jail basically, having completely lost his mind. So once Romero breaks him out of jail, we’ve gone past that off-ramp. Then it felt like we were back in pure “Bates Motel” territory. And we were back to the love story between Norman and Norma.

Cuse: We felt like it would be deeply disappointing to have the show end in the same way that “Psycho” did. We borrowed these elements from the “Psycho” mythology, these two characters, and some of the iconographic imagery, but we were always telling our own story. And our own story had to have its own conclusion. We thought it was fun to weave in and out of the mythology, particularly the Marion Crane mythology but we were doing our own thing.

Norman invites Dylan over for the worst dinner party ever…

Fair enough. But it leads to a heartbreaking conversation between the two brothers about wanting things that can’t happen. Norman has lost touch with any sense of reality.

Cuse: Very much so.

Ehrin: It’s Dylan’s own frustration that all those things have been taken away from him. It’s this craziness that he’s lived with his whole life. It’s as much a wake-up call for Dylan in that moment as it is for Norman. He’s definitely not trying to protect Norman in that moment because he’s dealing with his own s–t.

Norman essentially forces him to kill him.

Cuse: We wanted the ending to be messy. We wanted it to be spontaneous. There’s this real poignancy that Dylan helps Norman have this moment of clarity, that he recognizes that what’s going on  … (read more)