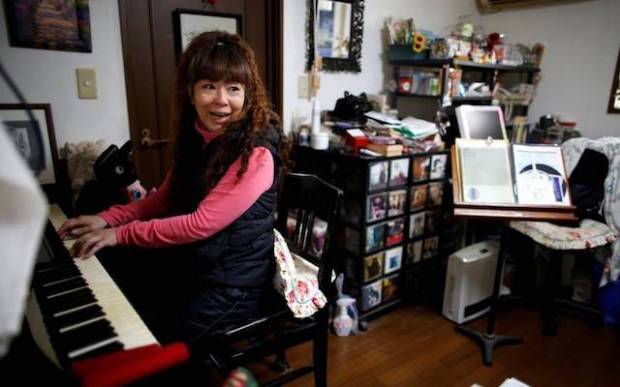 Hiromi Tanaka, 54, says she relies on income from giving private singing lessons to a dwindling number of students, and her mother’s pension to make ends meet. | REUTERS

Linda Sieg and Ami Miyazaki report: Their youth long gone, members of Japan’s generation of “parasite singles” face a precarious future, wondering how to survive once the parents many depended on for years pass away.

Some 4.5 million Japanese aged between 35 and 54 were living with their parents in 2016, according to a researcher at the Statistical Research and Training Institute on a demographic phenomena that emerged two decades ago, when youthful singles made headlines for mooching off parents to lead carefree lives.

Now, without pensions or savings of their own, these middle-aged stay-at-homes threaten to place an extra burden on a social welfare system that is already creaking under pressure from Japan’s aging population and shrinking workforce.

Hiromi Tanaka once sang backup for pop groups, and epitomized the optimism of youth.

“I got used to living in an unstable situation and figured somehow it would work out,” Tanaka told Reuters as she sat at the piano in a small parlor of an old house connected to her elderly mother’s next door.

Now aged 54, Tanaka relies on income from giving private singing lessons to a dwindling number of students, and her mother’s pension to make ends meet. She has no pension plan of her own, and has used up most of her savings.

“My father died last year so pension income was halved,” she said. “If things go on like this, my mother and I will fall together.”

Tanaka is one of the growing ranks of “life-time singles,” whose numbers hit a record in 2015, according to data released this month that showed that among 50-year-olds, 1 in 4 men and 1 in 7 women were unmarried.

“During the ‘bubble economy’ until the mid-1990s, the 20-somethings were happily amusing themselves. They thought by the time they were in their 30s, they’d be married,” said Masahiro Yamada, a Chuo University sociologist who coined the term “parasite singles” in 1997.

Akihiro Karube, 53, who was diagnosed with Parkinson’s disease and had to quit his job, says he now relies on his father’s pension and a disability pension of his own. | REUTERS

“But one-third never married and are now around age 50,” Yamada said.

The trend is not only a factor behind Japan’s low birthrate and shrinking population. It also puts an extra damper on consumption since new household formation is a key driver of private spending.

And since about 20 percent of the middle-aged stay-at-home singles rely on parents for support, they also threaten to weigh on social safety nets. “Once they use up inherited assets and savings, when nothing is left, they will go on the dole,” Yamada said.

The rise in those shunning marriage, experts say, is due not only to more diverse lifestyles but to an increase in low-paying, unstable jobs. Part-timers, temps or contract workers now account for nearly 40 percent of the workforce compared to about 20 percent in the 1980s.

Although recent tightness in Japan’s labor market has meant a slight fall in the number of singles living off parents, the overall trend probably won’t change, said Katsuhiko Fujimori, an economist at Mizuho Information and Research Institute … (read more)