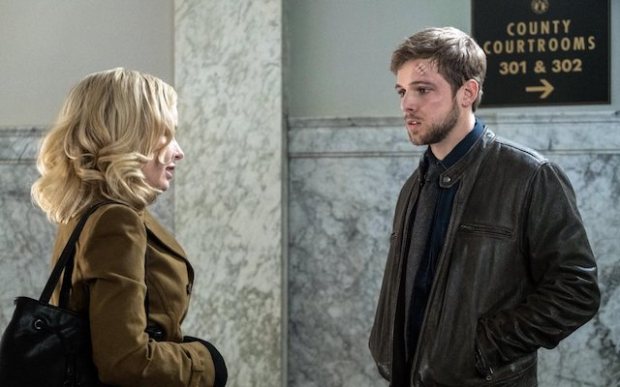 The battle for dominance over Norman Bates’ mind.

Jodi Walker writes: So much of Bates Motel season 5 has been about the battle for dominance over Norman Bates’ mind. We saw hints of Mother throughout the first four seasons, from her first attempted attack on Norma’s brother Caleb all the way to killing Emma’s mother in Norma’s dressing gown. But in season 5, everyone is on the same page: Norman and Mother sat in the office of the Bates Motel, and she told him point blank that she was a dissociative identity he had created over the course of his life to protect him from the trauma of his formative years. And since facing up to what Mother is, and just what lengths she’s willing to go to protect him, Norman has been fighting to keep her at bay…

And Norman has lost.

Freddie Highmore has been wowing us all to pieces this season as one actor flawlessly transitioning between two very different characters, but in Bates Motel’s last episode before the finale, the series completely flips the script. In Monday’s episode, we’re treated to two different (insanely talented) actors playing one single (insane) character, and though it’s happened before, it’s never happened like this. Because Norman Bates has completely left the building. Mother is finally totally and completely in charge of Norman’s mind, and the irony of it is that she’s never been less in control of what happens to him. Mother may be in his head, but what happens to Norman is utterly out of her hands.

Much as this season has taken the time to mourn Norma over and over and over again, its penultimate episode builds on Norman’s extended absence by laying out just how much destruction he’s left in his wake. Since we’ve known him, Norman Bates has been broken — in need of fixing that never came.

In Monday’s episode, as we wade through what remains of Dylan and Emma’s marriage; as Dylan is accused knowing what his brother was capable of and not preventing it; as Romero admits the only thing keeping him alive for the last two years was the thought of revenge murder… it becomes abundantly clear that Norman’s brokenness has finally broken everyone else around him. I’ve been prepared (with my hands over my eyes, peeking through my fingers, sure, but still prepared) for Dylan or Emma to potentially meet a fatal end. But somehow this — this possibly irreparable damage that could have been prevented at nearly any point in the past except this one… this hurts more … (read more)