Potato chip shortage due to typhoon damage in Hokkaido.

TOKYO — Due to typhoons that hit Hokkaido last year, Japanese snack food manufacturers Calbee and Koikeya have announced a discontinuation and temporary halt on some potato chip products. Both companies have been forced to downsize their production to top-selling and standard potato chips only, because the poor harvest has resulted in a shortage of potatoes, Fuji TV reported.

Calbee will permanently stop the shipment of 18 varieties of potato chips, including “French Salad Flavor 60g” and “Plum Flavor 60g,” starting April 15. Sales will last until stocks run out at stores nationwide. From April 22, 15 varieties of Calbee potato chips including “BIG BAG Lightly Salted” will have their shipment temporarily suspended … (read more) 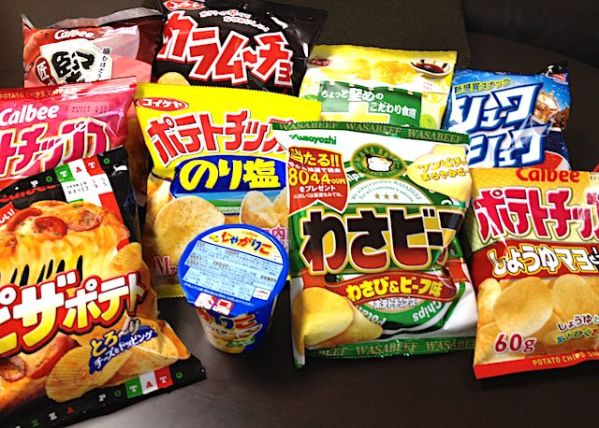 Shoko Oda reports: Demand for potato chips has surged in Japan this week, with products on offer for 6 times their retail price online after Japanese snack company Calbee Inc. halted the sale of some of its most popular chip brands. Calbee’s pizza-flavored chips were going for about 1,250 yen ($12) on Yahoo Japan Corp.’s auction website Friday. One bag usually sells for less than 200 yen. Photos of near-empty shelves at their local supermarkets were trending on Twitter.

The crunch came after Calbee warned on Monday that it will temporarily halt the sale of 15 types of potato chips due to a bad crop in Hokkaido, a key potato-producing region. The northern island was hit by a record number of typhoons last year. Calbee, which has a market value of 507.9 billion yen and is 20 percent-owned by PepsiCo Inc., has a 73 percent market share of potato chips.

Potato chips are a big deal in Japan, a country also known for its senbei rice crackers and Pocky sticks. Calbee’s potato-snack products were the most and second-most popular snacks in a TV Asahi poll of 10,000 people and 13 confectionery makers last year … (read more)

Brian Ashcraft reports: Typhoons that hit Hokkaido last August have resulted in a domestic spud shortage for Japan. Know what fewer potatoes means? Fewer potato chips. And like that, the panic buying has begun.

According to Jiji, Japanese snack companies Calbee and Koikeya are ceasing the sale of numerous potato chip products because of this shortage. Japan Today reports that starting April 15, Calbee will no longer ship 18 potato chip snack varieties, and from April 22, it will temporarily suspend 15 more varieties, including its Big Bag Lightly Salted, which might be the country’s most iconic potato chip.

Not all potato chips are disappearing from Japan. However, because the sale of certain popular varieties are either ceasing or stopping temporarily, stock is already vanishing from certain store shelves … (read more)

Adam Taylor reports: Japan is in the grip of a major potato chips crisis.

Shelves are empty in many stores, with popular brands halting sales and no sign when they will return. Japanese consumers have been stocking up on the affected chips wherever they can, bulk-buying at sometimes inflated prices. According to the Fuji News Network, 20 bags of the popular pizza-flavored chip “Pizza Potato” were being sold online for 120,000 yen ($1,100) on Thursday.

On social media, Japanese shoppers have been sharing photographs of barren shelves, gossiping about where stray bags might be found … (read more)