Render of the new AeroMobil flying car, set to be released and for sale on April 20 (Credit: AeroMobil)

Loz Blain  reports: Slovakian flying car company AeroMobil is ready for liftoff, with the announcement that it’s going to launch a production-ready, road-registrable aircraft in a week’s time. The new flying car, which will debut at Top Marques in Monaco on April 20, will be available for pre-order this year.

Whether this news sends you into fits of excitement or not will likely depend on what you really want from your flying car. If it’s vertical take-off and landing (VTOL) Jetsons-style commuting, that’s not what the AeroMobil delivers. 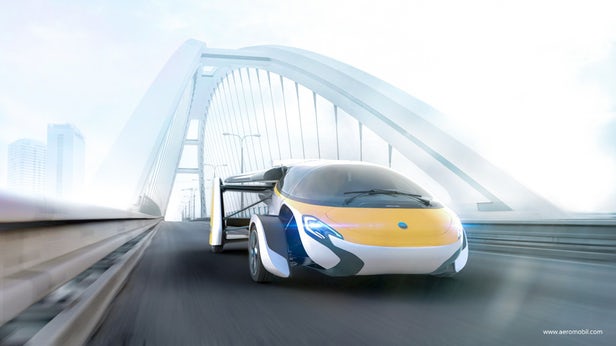 But if it’s a vehicle that you can drive from your home to an airstrip, cover some bulk miles in the air, then land on another airstrip and drive to your final destination, this thing is designed to meet both road and aircraft regulations and should do the job nicely.

On the road, it’s a futuristic looking two-seater, with its broad wings folded back against the tail. From the looks of the new renders, it seems it’ll operate as a semi open wheeler on the ground, with wheel arches that extend out sideways in car mode for a wider wheelbase, then retract for better aerodynamics in the air.

If the AeroMobil 3.0 prototype is anything to go by, the interior will be absolutely stuffed to the gills with flight gauges and dials, looking much more like a cockpit than a dash. … (read more)