A senior Japanese diplomat said it appeared the U.S. position was to put maximum pressure on North Korea to reach a solution peacefully and diplomatically.

With tension growing markedly, the Korean peninsula is the closest it has been to a “military clash” since Pyongyang’s first nuclear test in 2006, an influential state-run Chinese newspaper said on Wednesday.

North Korea should halt any plans for nuclear and missile activities “for its own security”, the Global Times said in an editorial.

While widely read in China and run by the ruling Communist Party’s official People’s Daily, the Global Times does not represent government policy.

Tension has escalated sharply on the Korean peninsula amid concerns that reclusive North Korea could soon conduct a sixth nuclear test or more missile launches and U.S. President Donald Trump’s threat of unilateral action to solve the problem.

Trump, who has urged China to do more to rein in its impoverished ally and neighbor, said on Twitter that North Korea was “looking for trouble” and the United States would “solve the problem” with or without Beijing’s help. 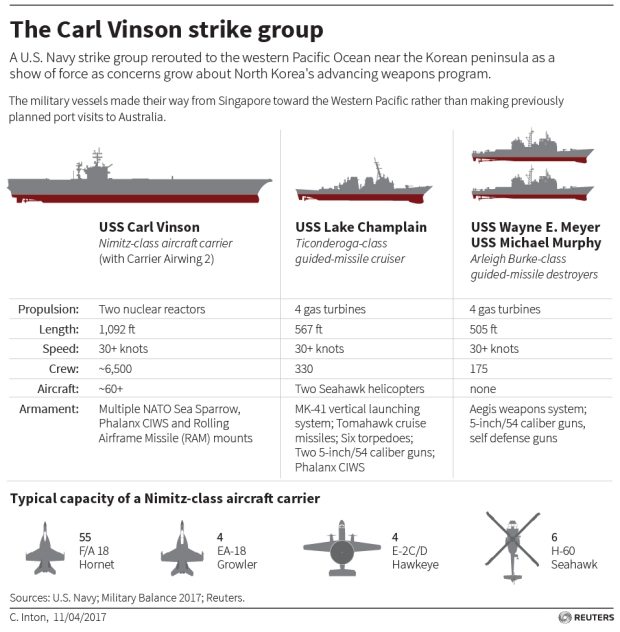 “Not only [is] Washington brimming with confidence and arrogance following the missile attacks on Syria, but Trump is also willing to be regarded as a man who honors his promises,” the Global Times said.

“The U.S. is making up its mind to stop the North from conducting further nuclear tests. It doesn’t plan to co-exist with a nuclear-armed Pyongyang,” it said. “Pyongyang should avoid making mistakes at this time.”

North Korean state media warned on Tuesday of a nuclear attack on the United States at any sign of American aggression.

Officials from the North, including leader Kim Jong Un, have indicated an intercontinental ballistic missile test or something similar could be coming.

Saturday will be the 105th birthday of the founding leader.

The Japanese Maritime Self Defence Force (MSDF) and the U.S. Navy could conduct helicopter landings on each other’s ships, as well as communication drills, as the U.S. ships pass through waters close to Japanese territory, the sources said.

“Japan wants to dispatch several destroyers as the Carl Vinson enters the East China Sea,” one of them said … (read more)