Meet ‘The Man in the Theater Line’.

Anthony Breznican writes: He was the original Mansplainer, one who believed his insights had “well, a great deal of validity.”

The unnamed blowhard in 1977’s Annie Hall prattles on so endlessly about director Federico Fellini and media philosopher Marshall McLuhan that Woody Allen can barely focus on his own squabble with Diane Keaton.

Eventually the loudmouth chases Allen’s narrator through the fourth wall to join him in addressing the audience, only to up face to face with the real McLuhan, who demolishes him with a snorted: “You know nothing of my work.”

Now, the “Man in Theater Line” gets to tell his side of the story, and he reveals that one of the most perfect scenes in movie history was a disaster to shoot.

“Part of the reason the scene works is because I am such an a–hole and I actually believe what I’m doing, you know?” says Russell Horton, now 75, a lifelong character actor who is actually nothing like his insufferable Annie Hall character. He’s boisterous for sure, but also fun, and sweet — a laid-back grandfather of four kids who call him “GrandDude.”

“You probably grew up with me,” he says. Another major role for him has been voicing the Trix Rabbit in breakfast cereal commercials for 35 years. “Trix are for kids,” he says wistfully. “That’s a gig that put my kids through college, I’ll tell you.”

Back when Allen’s casting director, Juliet Taylor, selected Horton as the Man in the Theater Line, he was a recent Los Angeles transplant to New York City. “I’m your basic workaday actor. I was doing a lot of TV. I was doing Broadway shows,” he says. “You know, the big problem about being the kind of actor I am, you’re sort of stuck with the way you look, and so I’m always playing professors or nerds.”

He wasn’t sure he got the part until a strange, abrupt encounter with Allen.

“I got a call and they just said, ‘Go meet Mr. Allen,’ and they were shooting on a street in New York,” Horton recalls. “The assistant director brought him over, and he looked at me, up and down, he said, ‘Man in the movie line?’ and the AD said yes, and he walked away. I said, ‘What was that?’ The AD said, ‘Well, that was it. He just wanted to check you out.’ He apparently had great confidence in Juliet Taylor.”

That faith has never wavered – the filmmaker and Taylor are still working together, most recently on last year’s Café Society.

“Now the second thing that’s very strange about him is, at that period, I don’t know if it’s true now, but he never let anybody see the whole script,” Horton says. “I got the scene, but I had no idea where it fit in or how it related to anything that was going on. I didn’t even have the ending.”

As fond of analysis as Allen may be in real life, there was none on set. No deep discussions about the scene, no scraps of background information about the Man in Theater Line’s motivation. Instead, Allen expected the actors to just sort of grasp it intuitively. “He gives you very little direction. He just said, ‘You know what’s going on?’” Horton recalls. “I said, ‘I think so.’ And he said, ‘Let’s do it.’” 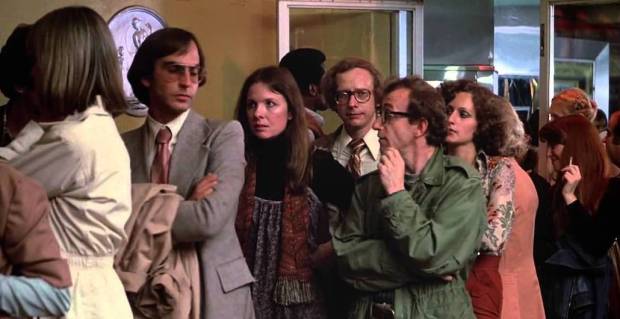 Horton tried to evoke a little sympathy for the Man in Theater Line (whom he named “David,” even if the script never identifies him). He felt this night out was David’s first date after a long dry spell. He’s trying hard. Too hard. And getting desperate now that his date’s eyes are rolling up like the reels on a slot machine.

The person who wasn’t trying at all: McLuhan. “I guess he didn’t take it terribly seriously because he couldn’t remember his line,” Horton says. “He had one line and he kept blowing it. It was a two-and-a-half-minute take. It was one of the longest, uncut, comedy sequences, up to that time. … (read more)