April is tulip season in Skagit county, the region of the pacific Northwest best known for the flower, celebrated in our annual tulip festival, but a few weeks before the tulips get rocking’, we see the explosion of the less famous but equally delightful daffodils. Here’s a bird’s-eye view of the new blooms:

Driving in the farmlands around La Conner, Washington, over the last several days, the absurdity of the odd-sounding word “daffodil” has been playing in my head. We see signs everywhere displaying the word. So I came home and looked it up, to see why it sounds that way. Here’s the origin:

Variant of Middle English affodill, from Medieval Latin affodillus, from Latin asphodelus, from Ancient Greek ἀσφόδελος (asphódelos), of unknown origin. The initial d- is perhaps from merging of the article in Dutch de affodil, the Netherlands being a source for bulbs.

Not unlike ‘Apron’, which began as two words. A pron.

I took a few snapshots of local daffodils in bloom. 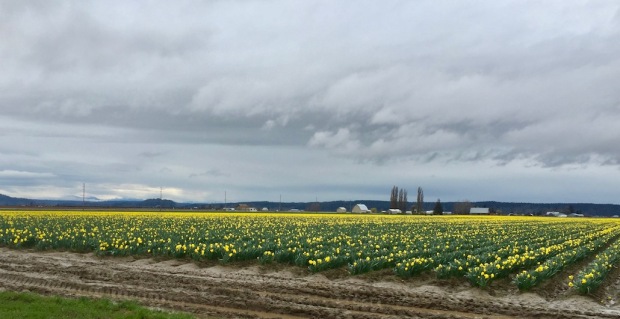 And here’s more on the Tulip Festival, which gets fully underway a little later this month:

Madeline McKenzie reports: The Skagit Valley Tulip Festival always starts the first of April with the slogan “Bloom dates according to Mother Nature.” This year’s chilly winter means blooms are a bit later than in past years. That’s good news, according to Cindy Verge, executive director of the festival. “Cooler weather lets the tulips come up gradually, as they’re meant to. During the last few years’ warm winters, they grew too fast and were short and not as sturdy,” she said. “Growing slower makes them taller and stronger, and they should be in full bloom with perfect timing in the middle of April.”

To help you plan your visit, the Tulip Festival updates its online bloom calendar daily, showing which fields in the area are in bloom.

Display gardens in the two main festival venues, RoozenGaarde and Tulip Town, have flowers in bloom all month. The acres of tulip fields near the gardens and around the Skagit Valley are expected to bloom around April 8 and the few weeks beyond. Daffodil fields that have been in bloom for weeks should still be colorful through the first week of April. Fields of daffodils are left intact through their bloom cycle, though their color fades, unlike tulips that are “topped” toward the end of their bloom cycle to strengthen the bulbs. … (read more)