I tried to like Iron Fist. I really did. I had to because I am a hopeless fanboy of the Marvel Cinematic Universe (MCU), which encompasses the big-budget films (Iron Man, Captain America, Thor, Guardians of the Galaxy, Doctor Strange, The Avengers and their many numbered sequels), and also television series on ABC (Agents of SHIELD, Agent Carter) and Netflix (Daredevil, Jessica Jones, Luke Cage) — to name just those which have been released up to the time Iron Fist dropped on Netflix. The basic motto of Marvelism is “It’s All Connected,” meaning all the stories take place in the same alternative universe, and the stories and characters interact on an on-going basis, just as in the comics. So, while it’s not required that someone watch all of the connected offerings on screens big and small, part of the deeply nerdy pleasure — a big part — is experiencing the audacious scale of the “all connected” MCU, and intricate cross-referencing among the many stories and characters in it.

Even to Marvelist true believers such as myself, all the pieces of the MCU have certainly not been of equal quality and not all been squarely in the sweet spot of my own personal comic preferences.  The Thor films didn’t rise to the same level as the other early stand-alone movies, I’m on the list of people who felt Iron Man 3 was, to use a phrase found a couple of times in that movie’s dialogue, “a hot mess,” and I’ve reluctantly come to see that some of the criticism of Civil War (overstuffed and rushed) had some merit.  But Iron Fist is in a different category: I watched the 13th and last episode last night and I’m very sad to say, it’s bad … at times, terrible.

Major media reviewers have all had their say on the latest Netfilx Marvel series.  I’ve avoided most in-depth reviews because I didn’t have the chance to immediately binge on the whole thing as I have with the other Netflix Marvel offerings (real life, including my first experience with dentistry in Hong Kong, raised pesky obstacles).  I wanted to give the show a chance and see it with as few pre-judgments as possible. But I’d absorbed enough from headlines and pieces that avoid the biggest plot spoilers to know that Iron Fist did not receive the best reviews.  The knocks on Iron Fist seem to break down into two categories: 1) CULTURAL APPROPRIATION!!! and, 2) everything else, which boils down to “it’s not as good as the other three Netflix Marvel shows.”

There’s a sub-point about “white-washing” – but in the case of Iron Fist, it’s kind of confusing, because the character was always white.  Yes, he could have been reinvented for the Marvel Cinematic Universe as Asian, and I’ve seen some good fan proposals for how that could have been done, but I fall into the camp of wanting to see original non-white/non-male characters like Luke Cage or the upcoming Captain Marvel, not ones that involve recasting and a major retcon.

This gets the culture-wars preliminaries out of the way.  I’m in the camp that didn’t care about those issues in Iron Fist and, so count this as thoughts from a Neanderthal, if you like.

No, the real problems with Iron Fist are that what it does well, it stretches out into too many episodes, and there’s a lot it could have done that it doesn’t.  In the middle of the whole thing is a character, Danny Rand, i.e. the Iron Fist, who isn’t particularly likable or, frankly, that interesting. And a whole lot of the show is brought down by the worst writing in any of the Netflix Marvel shows (and that ties with some of the worst on the much lower-budget ABC series).

Much has been written about the predictable story arcs of comic book films.  I’m a comics fan, so my reaction to these criticisms is that we’re talking about genre fiction and film – by definition, they conform to certain tropes.  One of them is the origin story, and Iron Fist is naturally an origin story, being the introduction of the character for the first time on screen.  Iron Fist does this about as well as any comic story does, and in a way that has become characteristic of the Netflix Marvel shows – by weaving the origin narrative into the story in the current time in flashbacks, dialogue or other story elements over the first few episodes.  Danny Rand – the Iron Fist – is the son and heir to the owner of a large, powerful corporation headquartered in New York.  His parents are killed in a plane crash in the Himalayan mountains, which Danny survives.  He’s rescued and then raised by “warrior monks” in the mysterious hidden city of Kun Lun.  After being gone for 15 years, the story begins as he returns to New York.

This is all good, but it’s stretched out over too much time in the first few episodes.  Beyond this, the series misses many opportunities to deal with the parts of this particular superhero’s story that are distinct.  We see almost nothing of the details of Danny’s life in Kun Lun, the “sacred city” that occasionally makes an appearance in the Himalayas. Instead, we see streets and offices in New York … lots of streets and offices.  The fact that Danny is walking around barefoot serves as a stand-in for his exotic background.  This is a bit of understatement that may have seemed clever in a story pitch, but I suspect was accepted with the unstated rationale that it didn’t involve a lot of location shooting or expensive CGI.

With Danny’s return to New York from mystical Kun Lun, we have a retelling of the classic story of “disenfranchised prince strives to reclaim his throne.”  Again, I have no problem with the fact that this is a well-worn trope, but the predictably evil generic corporation he seeks to regain control of is apparently a Big Deal in industries as disparate as energy, pharmaceuticals and logistics.  Can’t they get at least one person in Hollywood script-approval meetings that has some clue about how the real world outside of film-making works?  (In this regard, I give credit where it’s due in Iron Man’s background: Having been based on the real-world character of Howard Hughes, Tony Stark’s father Howard and the company he built actually makes sense if not looked at too hard.)

Many of the story elements that are covered in the first half of the season do end up becoming important in the second half, but the first few episodes are so drawn out and leaden that there are a lot pieces thrown on the table that seem to have little in the way of continuity or coherence. It turns out that there is a decent story in all of this and some good themes, but it develops so ponderously and with such clunky dialogue that, for the first time in the MCU, I was wishing they’d wrap up the scene-setting and character-definition and get to some action more quickly.

There are some definite bright spots. The character of Claire Temple — who has appeared in all of the previous Netflix shows — is in many of the episodes, and Rosario Dawson manages to occasionally break through the mechanical dialogue to show why she has become a fan favorite in this role.

Jessica Henwick in the role of struggling New York martial arts instructor Coleen Wing turns in a decent performance, but is also blessed with the most interesting character arc and story line in the series. (A note on a personal reaction to Henwick: If you do watch Iron Fist, take note of a fascinating thing about her appearance. She is among that group of people who is absolutely transformed by a smile. I found her frankly somewhat plain until the story finally gave her reason to smile, at which point she is a real beauty.)

Carrie-Ann Moss reprises the role of the icy lawyer Jeri Hogarth, first introduced in Jessica Jones. Perhaps it is the character, but whenever she’s on the screen in Iron Fist, I had a feeling of relief that a talented adult was being given the chance to pull the show’s score up.

But the high point is David Wenham’s performance as a truly great villain, Harold Meechum.  (Note that the Netflix series have generally done the best job with their villains, an issue in which many of the other MCU offerings have fallen short.) Over the course of the 13 episodes, I found myself looking forward to scenes that featured his depiction of a manipulative psychopath. 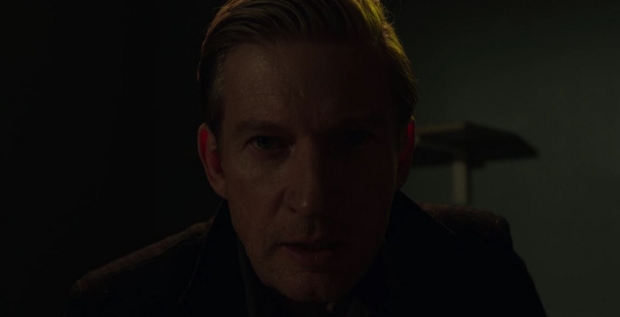 Another villain, Madame Gao (played by Wai Ching Ho) returns from a relatively minor part in the Daredevil series to play a larger role in Iron Fist and ends up being quite interesting as well.

But the center of the story, Finn Jones in the role of Danny Rand, varies from barely tolerable to just plain awful. Watching him, I found myself trying to figure out which was worse — the character as defined in the script, or Jones’ cringe-inducing performance. It’s a toss-up. The character is simply not likeable. We finally come to understand that there’s nothing more to the explanation for why he is in New York than at first seemed to be the case, and that explanation makes a lot of what is supposed to hold the over-all story arc together a fairly tattered fabric. But Jones’ performance itself appears to have been premised on a brief explanation of the character’s motivation, which he then attempts to convey with skill that would consign him to supporting roles in the high school play. Danny Rand is an unappealing, poorly-drawn character played badly. At the heart of the mess is that we are supposed to accept that Jones’ character is a master of martial arts based on meditation and self-control, when the character as written and acted is essentially a child with always-visible (if poorly acted) anger and fear issues. 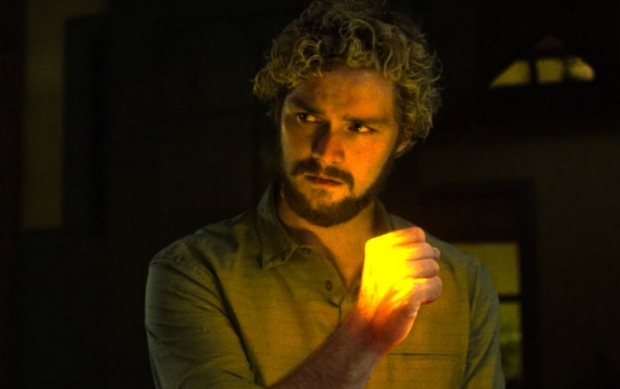 But no one really gets much in the way of decent dialogue, and the story mechanics look like they were never revised after the first white-board plot sketch. Things hit their low-point in the middle few episodes, which includes a full couple of hours that should have just been deleted entirely — and could have been, with no real damage to the over-all story. I recall during episode 7 feeling frankly amazed that an adult had allowed the money to be spent to film it.

The super-heroes featured in the four Netflix series will next team up together in The Defenders. Filming is already underway. 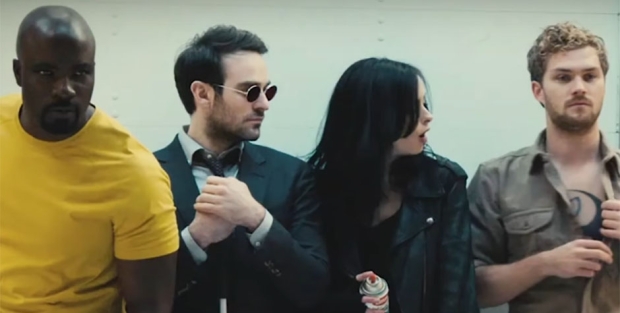 Let’s hope Danny Rand is relegated to a largely silent role. Iron Fist hasn’t undermined my devout Marvelism, but let’s just say it’s one of those books in the Bible that I could have skipped — the first time I’ve ever felt that way.