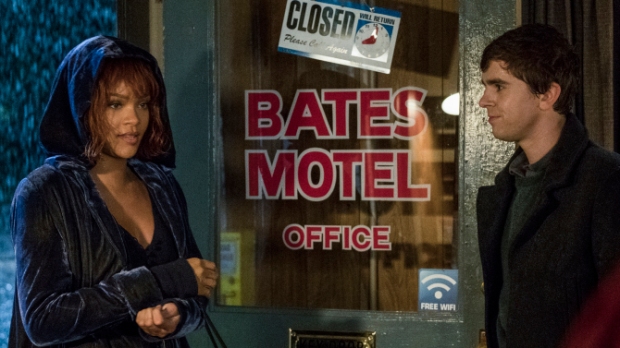 “It’s always been an idea to have ‘Bates Motel’ go through ‘Psycho’ in the last season like a tunnel, though it led to a different destination.”

The music superstar makes her highly anticipated TV acting debut in Monday’s episode of the A&E drama as Marion Crane, the role made famous by Janet Leigh in Alfred Hitchcock’s 1960 film “Psycho.”

And by all accounts, she more than delivers.

“She has enormous charisma,” says executive producer Carlton Cuse. “I think it’s no accident that any number of singers have successfully transitioned into acting. Among my personal favorites are Barbara Streisand and Frank Sinatra.”

The casting, which was announced at Comic-Con, came about when Cuse came across an article in Vanity Fair where Rihanna said she was a fan of the series. He reached out to her — and she agreed to suspend her world tour for a week to film the two-episode arc. She’ll also appear in next week’s hour, titled “Marion,” which airs March 27th.

Incorporating the classic character — whose shower scene is one of the most famous in film — was part of the producers’ plan from the beginning. “It’s always been an idea to have ‘Bates Motel’ go through ‘Psycho’ in the last season like a tunnel, though it led to a different destination,” executive producer Kerry Ehrin tells Variety.

The producers have always said that the two projects take divergent paths — which means the Marion Crane of the film isn’t the same woman we meet in “Bates Motel.” That’s something that appealed to Rihanna…. (read more)