There are a few “main lines” that seem to dominate pop music history of the 1960s – folk (Peter, Paul and Mary; Dylan), R&B and soul (Ray Charles, the Supremes) and of course “rock” (the Beatles, Jimi Hendrix)  The artists mentioned are of course just a few from the “A” list of pop music from that decade.  Any particular person will probably be able to name at least five to twenty in each genre, and no two “A lists” are likely to be quite the same.  But those “A lists” people make today and keep in their minds and memories tend to mainly lie along a few major “evolutionary narratives” that have well-known “flowerings” at the end of the 1960s and in the early 1970s.  In hindsight, the entire history of American folk music seemed to be somehow aimed at providing the jumping off point for Bob Dylan, and creating the archetype of the “singer/songwriter” (Carole King, James Taylor, Joni Mitchell).  Similarly, many people maintain a kind of “standard history” of R&B and Soul in which primitive blues and early R&B got “polished” by people like Ray Charles and inevitably turned into Motown.  With rock, the sketch history basically boils down to “before and after Sgt. Pepper.”

Artists and music that don’t lie along those main lines (or seem not to) fade from memory, and their prominence in their own time is forgotten.  The Ventures, an instrumental band that was incredibly popular in the first part of the 1960s, is a perfect example of this.  If you were born after, say, 1965, maybe you encountered a little of the music of the Ventures during one of the small surf music revivals (there was one in the 1970s – briefly – strangely associated with the development of Punk; and then Quentin Tarantino introduced a whole new generation to at least a few examples with the soundtrack of Pulp Fiction).  You might know one of their last hits, the theme song to the late 1960s schlocktastic cop show Hawaii Five-O (although the version of the song that actually played in the show was performed by the famous “Wrecking Crew,” not the Ventures themselves).  And if you’re a real surf music enthusiast (a rare thing, even after Tarantino), you may actually have an attitude about the Ventures (“too pop”).  But for a few years in the early 60s, their sound was everywhere. 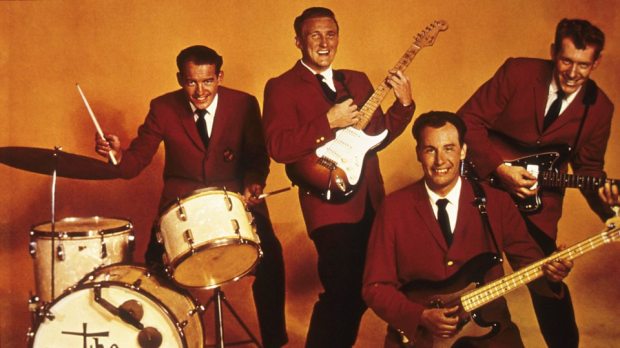 The Ventures were formed in 1958 by Bob Bogle and Tom Wilson in Tacoma, Washington.  They came together over a mutual love of the guitar, and before long were playing nightclubs in the Puget Sound area.  The roster of the rest of the band changed somewhat at first, but by 1960 they’d been joined by lead guitarist Nokie Edwards and released their first hit, Walk, Don’t Run, which peaked at #2 on the Billboard charts.

It’s worth pausing here for a second because Walk, Don’t Run is known today as a mainstay of the surf music songbook.  But it was originally written and recorded by jazz guitarist Johnny Smith in 1954.

It’s difficult to imagine a presentation of this song more different from how it later came to be known.  Walk, Don’t Run was original a cool jazz tune that would be perfectly at home in the setting of smoky urban nightclubs.  The great transformer of the electric guitar in the 1950s, Chet Atkins, recorded it again in 1956.  Here’s a later performance of the song by Atkins, but true to the way he very slightly rearranged it for his 1956 recording:

Here is a recording of the Ventures “performing” Walk, Don’t Run on the Saturday Night Beech-Nut Show in August of 1960, hosted by Dick Clark (strangely speaking from a bed) :

(Note that I put quotes around “performing” because, like all the pop-music television shows of the era, the sound is actually the released recording and the musicians were not really playing.)  In this video, the Ventures fit perfectly the image of a “hit rock band” in 1960 – four young, well-groomed white guys wearing suits and ties.

The Ventures’ 1960 version of Walk, Don’t Run was a completely different thing from the previous recordings of the song.  They recast it in the by-then increasingly recognizable terms of “rock-n-roll.”  This is typical of the pop music scene of the late 1950s and early 1960s. While “rock-n-roll” was recognized as “a thing” and very much talked about, it was not nearly as distinct from other kinds of pop music as it later became in terms of what songs were played and who the musicians were that played it.  There were bright lines between “Negro music” and everything else in terms of how the former was marketed, broadcast and consumed, but distinctions between other genres of music were not nearly as clear-cut as they came to seem later in the 1960s.

The idea that rock-n-roll was a completely distinct musical phenomenon and that there was a very clear set of cultural signifiers that went along with it (and nothing else) simply didn’t exist in 1960.  By the end of the decade that was more or less true, but in the first years of the 60s, rock-n-roll was still an open-ended set of stylistic musical elements and not yet much else.  While it was clearly identified with “young people,” a lot of the cultural connections people automatically make with the term today hadn’t been made until well into the second half of the 1960s.

Over the next few years, the band released a series of albums that sold extremely well – three or four per year.  Most had at least one song that was ubiquitous in radio play.  Few, if any, of these songs were written by any members of the band – in many cases the songs were covers of very recent recordings by other bands.  For instance, one of their biggest hits soon after Walk, Don’t Run was emblematic of the early 1960s: Telstar.

“Telstar” was the name of the first practical commercial communications satellite (and others in the same series), launched in July 1962 that beamed the first live television programs relayed in space, as well as handling telephone calls.

The Telstar satellite became very much a pop-culture phenomenon and, for a while, people seemed to refer to any satellite as “a Telstar,” just as they had called them “Sputniks” just a few years earlier.

The British band The Tornados capitalized on this with their song named after the satellite.  The Tornados released Telstar as a single in both the UK and the US.  The song hit the number one spot on the Billboard charts in the US in December of 1962 – the first record by an English group to ever do so.  The Ventures’ album including Telstar was released just a few weeks later, on January 5, 1963.  Apparently people couldn’t get enough Telstar, because the Ventures’ version hit number 8 on the Billboard chart, and the album went gold.

By 1964, the US-Soviet moon race was front and center in news media and public consciousness, and the Ventures continued the space theme with their album entitled (the) Ventures in Space. A listing of the tracks on this album show the decided space or science fiction theme:

Seriously … “Love Goddess of Venus?”  Yet the album cover has nothing whatsoever to do with any of this: 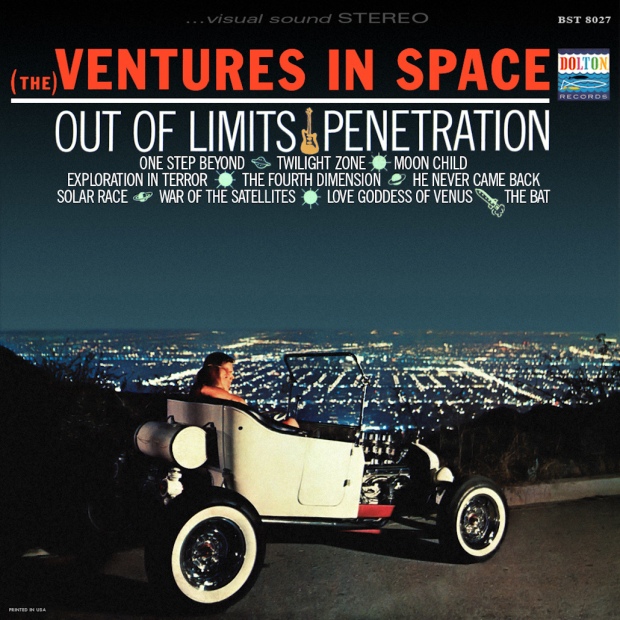 We see a young couple snuggled up in a by-then slightly dated Bucket-T hot rod overlooking Los Angeles at night.  This is a very good example of the kind of thing that, in hindsight, makes the early 1960s hard to get a grip on in terms of Western pop culture. There was a swirling mix of new symbols, new kinds of music, new ideas and, little by little, new kinds of life-styles, all of it loosely identified with “youth culture,” but it was not yet at all clear what any of that “meant,” if anything.  There was a lot of “new,” but there was not a clear direction to that newness.

The Ventures kept up their pace of releasing three or four albums per year for the next few years. In 1965 the band released an album entitled The Ventures a Go-Go; in 1966 came The Ventures Play the Batman Theme.  They were hitting the high spots of pop culture, mixing in covers of early Rolling Stones hits, taking a stab at (a very white brand of) R&B, and generally fighting against a swiftly accelerating retreat from being cool.  They had a brief moment of renewed radio airplay in 1969 with their version of the Hawaii Five-O theme, but by then their albums could be found in that part of every kid’s record collection that was gathering dust in favor of The Beatles, The Stones, Hendrix and Jefferson Airplane.

Today, The Ventures are almost forgotten, even though theirs was the recording of many of the standards of instrumental surf music that often get remembered, if that music is remembered at all.  The brief flourishing of the vocal surf groups like The Beach Boys and Jan & Dean typically hold whatever small place in histories of that music that get mentioned today.  They also played a major part in defining the “spy” sound — think the iconic guitar lick of the opening James Bond theme or Secret Agent Man.  Neither of those were the Ventures, but that very specific guitar band sound was made popular in large part by the airplay that hits by the Ventures got.

Within just a couple of years, their sound was thought of as “corny.”  The Ventures got swamped by “the 60s” … that much later part of the decade that everyone seems to remember much better.