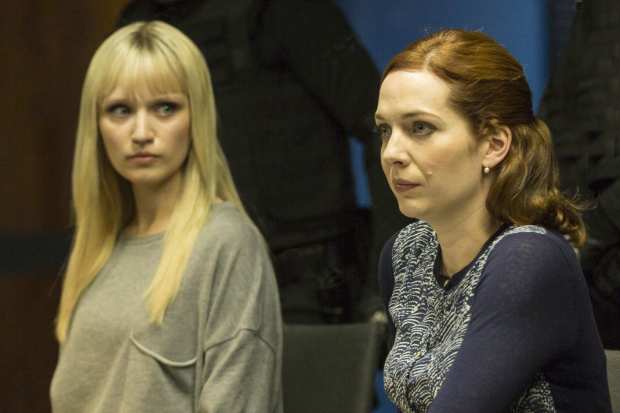 Angelica Jade Bastién writes: Toward the end of this episode, Hester asks Leo a question with a foregone conclusion: “Has any great change been accomplished, any unjust oppression ever overturned without violence?” If Hester ever felt reticent in enacting violence, perhaps she’d be trying to assuage her own guilt over killing a woman to get further information about the Silo. But she’s just proving a point to Leo, reminding him what’s necessary to create the revolution that Niska jump started. That Leo answers “no” means he agrees, albeit reluctantly. But what exactly will this revolution look like?

Mattie figures out the mature version of the code that Niska uploaded. Her version would wake up every synth on Earth at the same time. She speaks about this potential event as “a revolution.” This seems like something that would lead to chaos. The characters — human and synth — haven’t really thought much about the steps after synths gain consciousness on a wider scale. The exception being Niska, whose quest to gain rights for herself and synths everywhere would be a crucial foundation for their place in the world going forward. But even she hasn’t thought too deeply about what freedom looks like, or how synths would fit into the world once conscious, legal rights or not.

As characters make such important decisions about their places in the world, this episode raises several crucial questions: What does the synth revolution even look like? Will it be defined by the violent workings of Hester or kindness of Max? Will synths create a new form of living and moving through the world? Will some want to have the markers of traditional human life — marriage, kids, a job — like Karen wishes for? The reactions in “Episode 5” run the gamut, suggesting that they will have wide-ranging consequences for humans and synths alike.

On one end of the spectrum is Hester, who shows no regard for human beings beyond mild curiosity. Although she reveals a desire for physical pleasure after her and Leo crash at a hotel where human beings bring synths to have sex with. This leads her to initiate sex with Leo, an amorous turn of events that feels miscalculated for their partnership. Part of the problem is it comes on the heels of Hester asking Leo about the nature of violence within revolutions. It almost feels as if a scene is missing between her asking that question and when she hits on him.

In many ways, Niska exists on a similar wavelength as Hester, given her predilection for violence whenever she feels it’s necessary. But Niska has softened thanks to her relationship with Astrid. Of course, that doesn’t mean she won’t use violence in order to retain her safety. It becomes clear to Niska that the trial to prove her consciousness is a farce. The authorities will never grant her the freedom and the rights afforded to humans because doing so would be too threatening to the social order. Laura should have realized things would devolve after Niska expresses uncharacteristic affection by touching her hand. “Thank you, Laura … this won’t end the way you want it to,” she says.

Niska soon engenders an escape with little more than her charging cable and a watch she swipes from a guard. After overwhelming the electric circuits with her clever ploy, Niska escapes the facility, busting through guards and eluding their gunfire. People in power won’t cede ground unless forced to. Niska’s decision to approach humans on the level — after failing to win her freedom through traditional methods — further supports the idea that violence holds the key to synths gaining true freedom. … (read more)