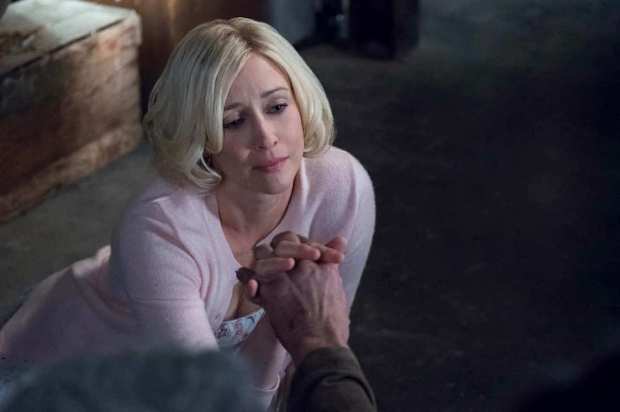 Most of the action this week goes down in the Bates house, specifically the basement. The morning after trapping his uncle, Norman wakes up to his mother’s voice telling him to stay out of the basement.

Brian Tallerico writes: The fractured reality of Norman Bates gets even more fascinating in this week’s installment of Bates Motel. For some time, we’ve known about his tendency to black out and become “Norma” (Vera Farmiga), his dead mother. This episode clarified the three realities in which Norman (Freddie Highmore) lives. In one, he’s as normal as he can be, offering kind advice to a new friend or managing the motel. When he’s alone, his mind fractures in a way that allows him to speak to his dead mother, almost as if talking to an imaginary friend, which we see in greater detail this week through the eyes of Chick (Ryan Hurst). Finally, in moments of great stress, he “becomes” Norma. And that’s when he’s truly dangerous.

“Norma” is the one who shackled Caleb (Kenny Johnson) to the floor in his basement. Caleb wakes up, groggily seeing a female shape and hearing a female voice, but the vision of Norma as his captor comes into focus and reveals Norman in a wig. Caleb immediately tries to appeal to the emotional tug of the family tree, telling “Norma” about her new “granddaughter.” It doesn’t work. As “Norma” says, “You know I’m not dead. So we need to figure out what to do with you.”

“We” includes Chick, who’s still upstairs, listening at the door. He has a conversation with “Norma” about how nice he’s been to Norman, and asks if he can keep their secret. (The secret isn’t that Norman is dangerously mentally ill, but that “Norma” isn’t dead.) Chick plays along, smartly calling him “Norma,” and offering to stay and help look after “you guys” while Caleb is still in the basement. What is Chick’s end game? Not only does he need a place to stay, but he finds the Norman/Norma dynamic fascinating, realizing that it would make a great book.

Meanwhile, Alex Romero (Nestor Carbonell) is getting transferred to a more secure prison after his status as an incarcerated officer was revealed. This subplot is intertwined through the episode, so we’ll race through it here for clarity’s sake. As we all suspected, as soon as Alex got word of his transfer, it’s time for a prison break! At a gas station, Alex overcomes his guardian, stealing his gun and handcuffing him to the sink. He convinces a stranger to give him a ride at gunpoint, but the car springs a flat after Alex dumps his driver, leaving him on foot. He finds his way to a farmhouse, where he’s about to steal a car when the owner’s child confronts him with a shotgun, which accidentally goes off, hitting Alex in the gut and knocking him to the ground. It’s a brutal shot, but I can’t believe this is the last we’ve seen of Alex.

Most of the action this week goes down in the Bates house, specifically the basement. The morning after trapping his uncle, Norman wakes up to his mother’s voice telling him to stay out of the basement. This is the persona in Norman’s head that hides the emotionally damaging truth for him, and has done so for years. It’s important to realize that Norman’s psyche is more fractured than ever, but these are dynamics that have been in place since season one. “Norma” has been defending Norman for a long time. We’re just seeing more of it in action now.

Speaking of protection, Norma and Caleb used to protect each other when they were children, the only ones who would be there when their abusive parents were not. Caleb is remembering those better times when he’s encountered by Chick. Caleb tries to appeal to his WTF sensibilities, urging him to be rational and get help. Norman is sick, but Chick is playing along with that sickness. It’s worth noting that  … (read more)