“John Landis requests you watch the trailer first without his voiceover narration, so you can enjoy Hitchcock’s uninterrupted narration.” – From the YouTube description.

I’m inclined to agree. As much as I enjoy the ‘Trailers from Hell‘ series, Landis’ narration here is characteristically casual, bordering on silly, and not always relevant to the movie,  but in spite of Landis’ occasionally meandering commentary, he’s still descriptive and insightful.

For example, discussing Hitchcock’s vulgarity, taste for wine, and predictable lunch habits are entertaining enough, but perhaps better suited to another medium.  Landis’ comments about seeing the Bates Motel house on the Universal Studio lot, however, were involving for me because I’ve also had the good fortune to see the Bates house, many years ago, during a Universal tour. Not the motel part, but the main house,  which from a distance, looks iconic, grand, and spooky. The tour guide explained that the legendary Bates house was built to 3/4 size, and was only used for exterior shots, so if one were to view it up close, it would be revealed as a somewhat miniaturized construction.

Is that true? This photo suggests otherwise. Landis also notes that the house has been moved and rebuilt multiple times, so it’s not clear which version of the Bates house I saw on my tour. 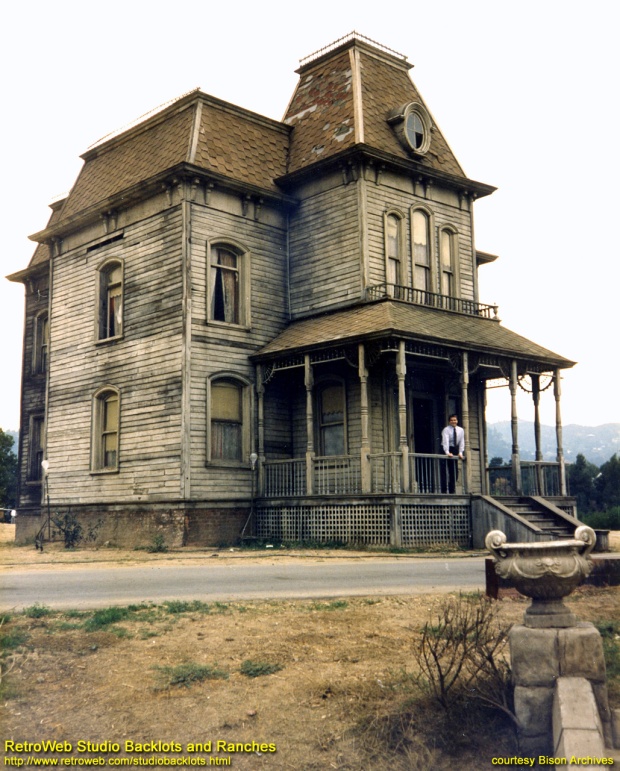 Landis also notes (quoting a comment by director and film historian Peter Bogdanovitch) that it’s difficult for people to fully understand how utterly radical and shocking this film was in its time. I imagine this is probably true. Not just in the theater, but it affected how safe people felt in their own showers  — my own mother, for example, who was a big reader of Hitchcock mystery paperbacks, and scared witless by the shower scene — for a generation. “The Birds“, too, changed audience perception of harmless birds, and was a big scary deal when it premiered on TV in the 1960s.

Landis calls “Psycho” the best film about a psychotic character, ever. (I suspect Travis Bickle might be a close second) The main female character, played by Vera Miles, is murdered early in the story, upending suspense movie storytelling conventions. Hitchcock’s secrecy campaign in the presentation of the movie was original and enormously effective. And finally, Anthony Perkins‘ disturbing portrayal of Norman Bates was so good, that according to Landis, it ruined Perkins’ career. Countless movie conventions were upended in this revolutionary film, and it spawned other projects based on the same characters, some not so good, some very good.

Alfred Hitchcock’s high-wire career gamble, getting the risky film made and distributed, his morbid, obsessive perfectionism, and his enduring partnership with his wife, are beautifully chronicled in the trashy-but-fun feature film “Hitchcock“, in 2012, with  Anthony Hopkins,  Helen Mirren,  Scarlett Johansson.