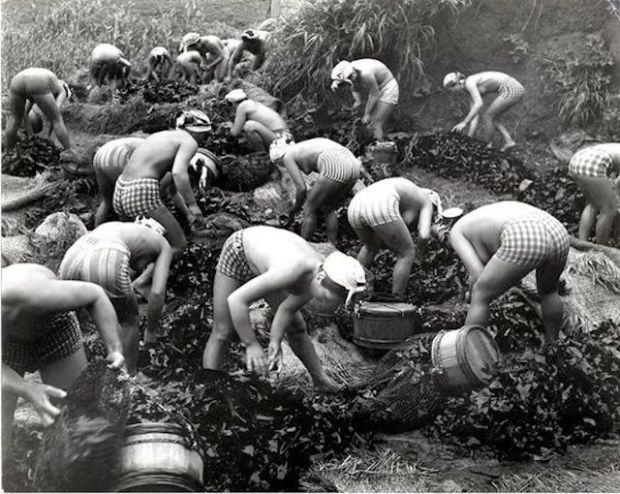 First, let’s talk about pearls in antiquity. This 1998  Nova series has a good sketch of ancient civilizations’ love of pearls:

Long known as the “Queen of Gems,” pearls possess a history and allure far beyond what today’s wearer may recognize. Throughout much of recorded history, a natural pearl necklace comprised of matched spheres was a treasure of almost incomparable value, in fact the most expensive jewelry in the world. Now we see pearls almost as accessories, relatively inexpensive decorations to accompany more costly gemstones.

Before the creation of cultured pearls in the early 1900s, natural pearls were so rare and expensive that they were reserved almost exclusively for the noble and very rich. A jewelry item that today’s working women might take for granted, a 16-inch strand of perhaps 50 pearls, often costs between $500 and $5,000. At the height of the Roman Empire, when pearl fever reached its peak, the historian Suetonius wrote that the Roman general Vitellius financed an entire military campaign by selling just one of his mother’s pearl earrings.

No one will ever know who were the earliest people to collect and wear pearls. George Frederick Kunz, whom I like to call America’s first gemologist, in his 1908 masterpiece, The Book of the Pearl, states his belief that an ancient fish-eating tribe, perhaps along the coast of India, initially appreciated the shape and lustre of saltwater pearls, which they discovered while opening oysters for food. 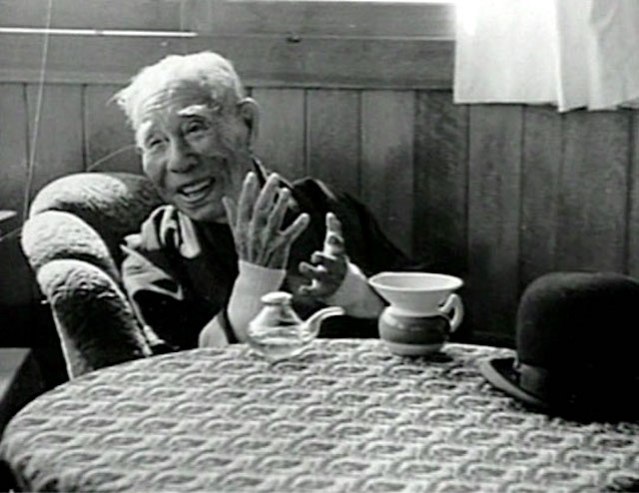 No matter the origin, a reverence for pearls spread throughout the world over the ensuing millennia. India’s sacred books and epic tales abound with pearl references. One legend has the Hindu god Krishna discovering pearls when he plucks the first one from the sea and presents it to his daughter Pandaí¯a on her wedding day. 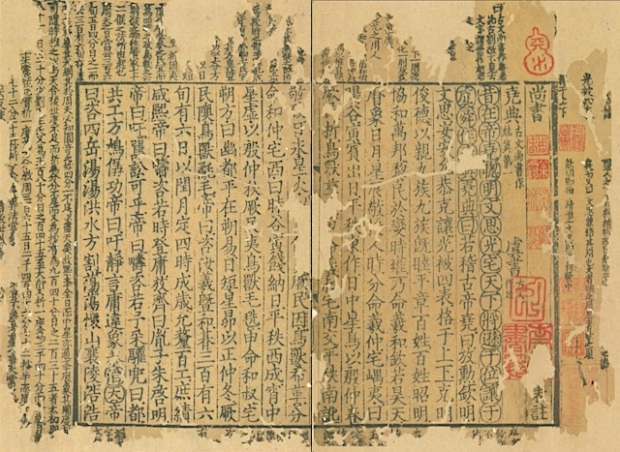 China’s long recorded history also provides ample evidence of the importance of pearls. In the Shu King, a 23rd-century B.C. book, the scribe sniffs that as tribute, a lesser king sent “strings of pearls not quite round.” 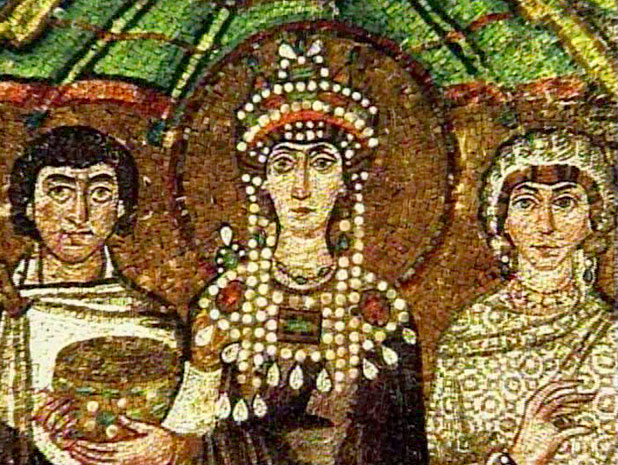 In Egypt, decorative mother-of-pearl was used at least as far back as 4200 B.C., but the use of pearls themselves seems to have been later, perhaps related to the Persian conquest in the fifth century B.C. Rome’s pearl craze reached its zenith during the first century B.C. Roman women upholstered couches with pearls and sewed so many into their gowns that they actually walked on their pearl-encrusted hems. Caligula, having made his horse a consul, decorated it with a pearl necklace. … (read more) 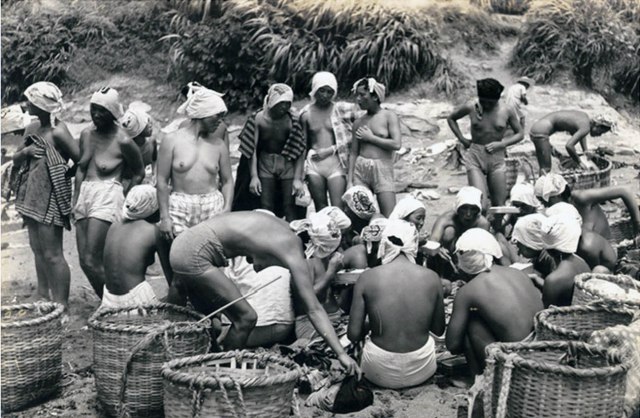 Michael Gakuran begins a selection of archive photos with this description.

One of the lesser-known but fascinating parts of Japanese culture is that of the Ama pearl divers. Ama (海女 in Japanese), literally means ‘woman of the sea’ and is recorded as early as 750 in the oldest Japanese anthology of poetry, the Man’yoshu. These women specialised in freediving some 30 feet down into cold water wearing nothing more than a loincloth. Utilising special techniques to hold their breath for up to 2 minutes at a time, they would work for up to 4 hours a day in order to gather abalone, seaweed and other shellfish … (more) 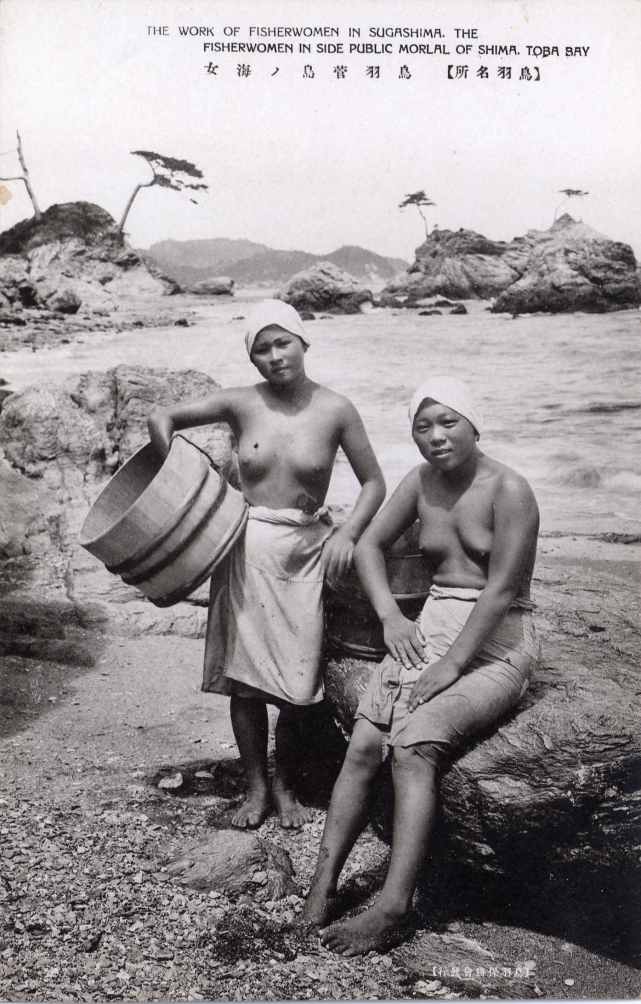 Before photographic record of pearl diving, visual history was preserved in painting and prints. Last September ama was featured in a Huffington Post item about an exhibition at  Musée Guimet in Paris, France, titled “Mirror of Desire: Images of Women in Japanese Prints.” 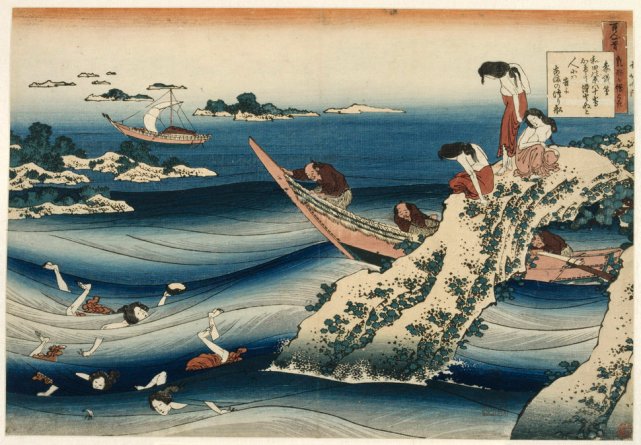 For centuries, a group of women known as ama have participated in an archaic, almost fairy tale-like profession. The Japanese term “ama” translates literally to “women of the sea,” and refers to the female free divers who’ve worked to gather seaweed, shellfish, and, most importantly, abalone and pearls, for thousands of years. Traditionally, ama dove in the nude, often wearing nothing but a small loincloth to help them gather their bounty, diving to depths of 30 meters and holding their breath for upwards of two minutes. Like mermaids, the naked ama passed on their skills to later generations, sustaining a magical profession still dominated by Japanese women (now in neoprene suits) today. 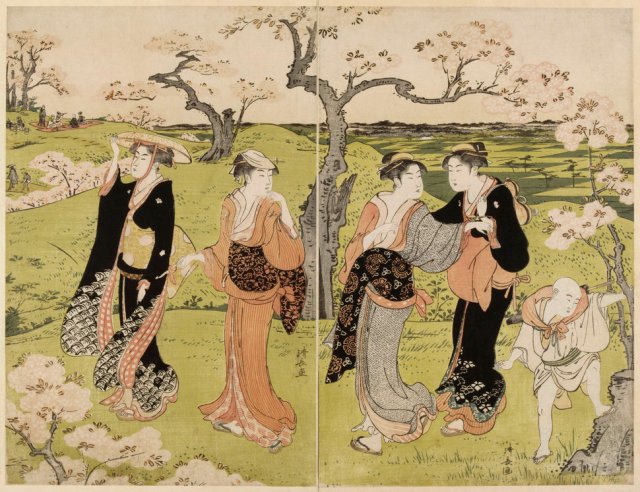 Prints made by well-known artists like Katsushika Hokusai and Kitagawa Utamaro give contemporary audiences a glimpse back in time, to the days when these 18th- and 19th-century women swam the seas in search of abalone. … (more) 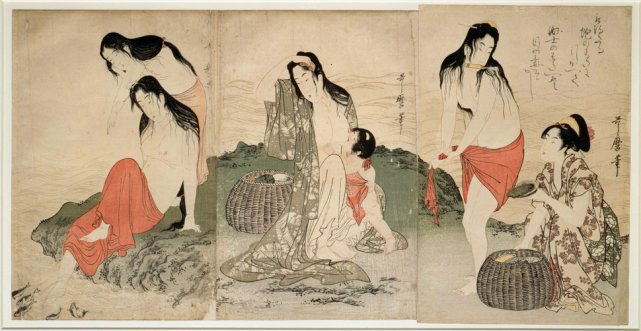 See more of the Gorgeous Prints Immortalize The Naked, Pearl-Diving ‘Mermaids’ Of Japan

Where were we? Yes, photographs. 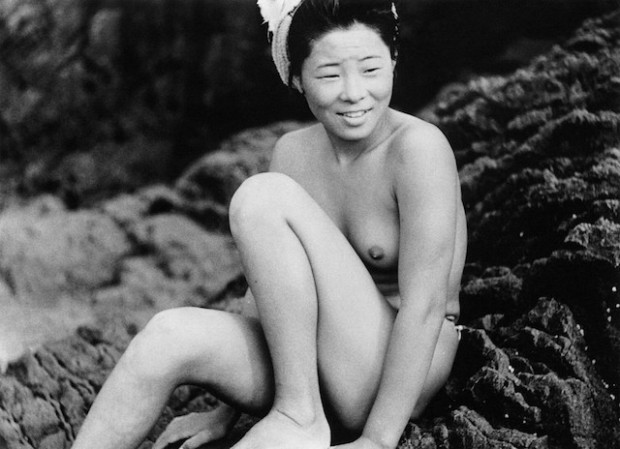 …The most profitable pursuit however was diving for pearls. Traditionally for Ama, finding a pearl inside an oyster was akin to receiving a large bonus while they went about their ancestral practice of collecting shellfish. That changed when Kokichi Mikimoto, founder of Mikimoto Pearl, began his enterprise. 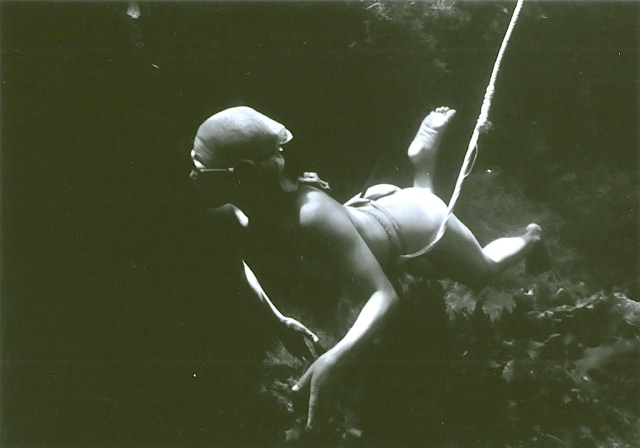 One photographer in particular stands out with his photographs of the Ama. His name was Yoshiyuki Iwase (1904-2001). He was given a gift of a small Kodak camera when young and found his muse in the beautiful mermaids of the tired, coastal regions of Japan. Thanks to his efforts, we can take a step back in time and have a glimpse at what life was like working as an Ama diver, and also see his progression as a photographer moving into nude portraits. 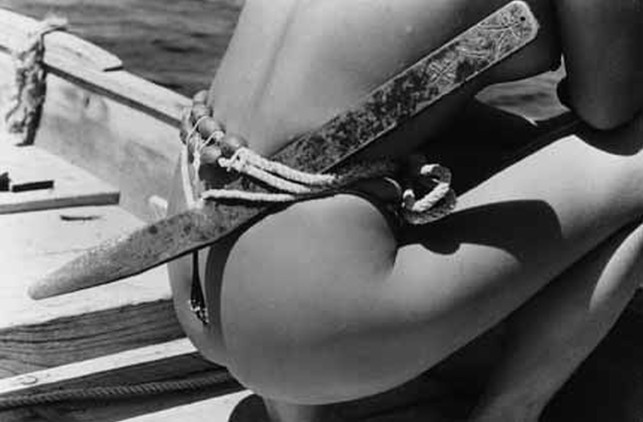 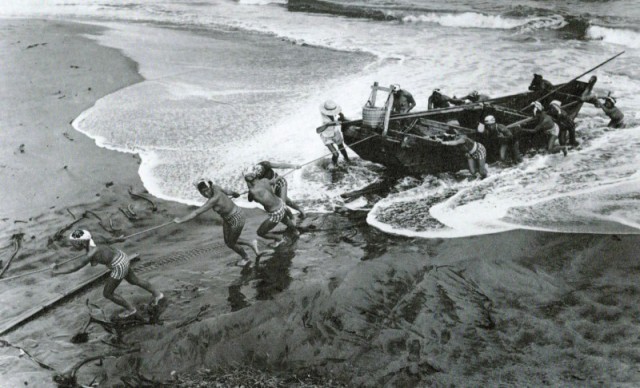 … Mikimoto used Ama divers to look after his cultivated pearls on Mikimoto Pearl Island, near Toba city. This business was the main reason for the strong association between Ama and pearl diving among foreign observers that continues to this day. Another little-known fact is that the ‘traditional’ white attire we often see Ama divers wearing was also created by Mikimoto. He observed how surprised the foreign tourists visiting his pearl island were when seeing the Ama diving naked wearing only their traditional loincloth. … (Source)

Some of these photos are among some of the most familiar and iconic, having appeared in LIFE Magazine in the middle of the 20th century.

Although the tradition is still maintained across many parts of Japan, the skinny-dipping practices of old have largely been lost. Since the Meiji era, divers wore goggles for clarity and from 1964, rubbery, black wetsuits were introduced. 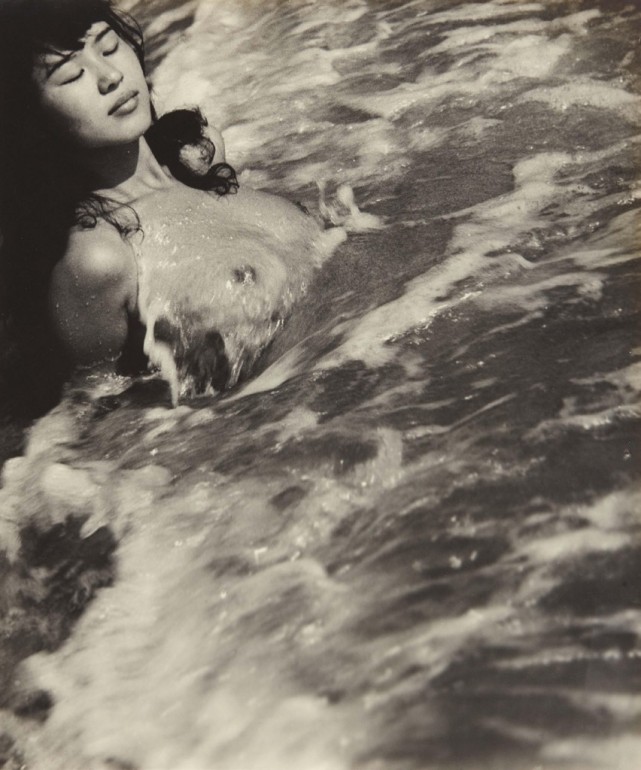 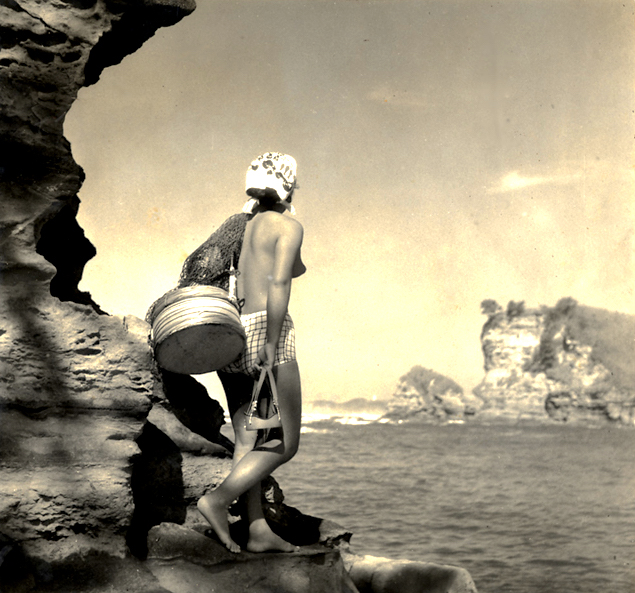 Depictions of Ama are featured in old works of art, such as the piece below by master Kuniyoshi. (Source)

Michael Gakuran concludes his collected series with a couple of archive videos, including this documentary featuring an an interview with a former Ama diver.