Over at dangerousminds, Richard Metzger writes:

Richard, you had me at “loud”. Here’s more of his review:

In the work of German composer Karlheinz Stockhausen—who Miles Davis admitted was a huge influence on him musically—there is a trademark thing he does where one sound will suddenly cut through all the rest, like some sort of electronic squiggle noise, distinguishing itself from everything else going on—the audio version of a shape, if that makes any sense—and then suddenly it’s gone again. There’s dissonance and then there’s a sudden sonic counterpoint to that, as can be heard in the 1973 concert appearance by Miles Davis and his septet recorded in Vienna. 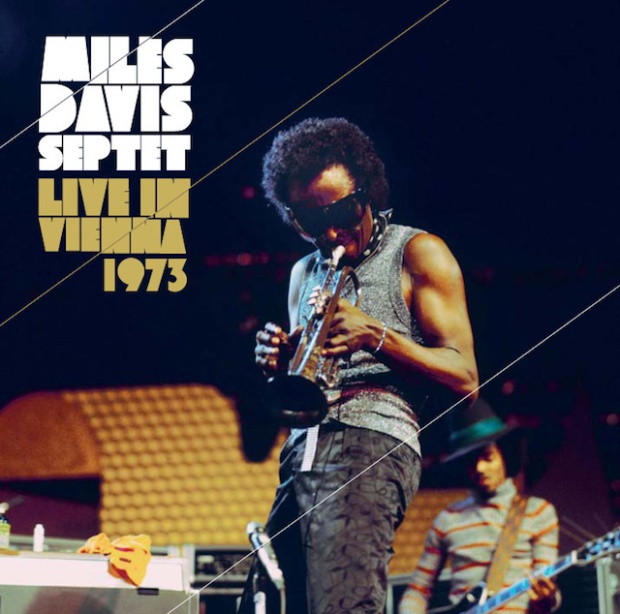 In the foreground, you have Miles’ wasp-like trumpet, Dave Liebman’s sax and flute and the inspired to the point of insanity fretwork of Reggie Lucas and Pete Cosey, whose wailing guitars shrieking through pedal effects rise up for a moment and then scurry away. Bassist Michael Henderson, drummer Al Foster and percussionist James Mtume keep the music from fragmenting into atomic particles. Everything is in service of an utterly monstrous cosmic groove here. Even the guitars are often used in a sort of percussive manner—not rhythmic—giving the music a dangerous, propulsive edge that occupies the spot where the Venn diagram intersects spacerock with Fela Kuti’s deepest, darkest funk workouts and Can, The Pop Group and Jimi Hendrix’s “Band of Gypsys.”

It’s fascinating to get to see the hands of the players here, especially Michael Henderson’s nimble fingers and Pete Cosey’s astonishing twelve-string guitar solo at the 30 minute mark that sounds just like Snakefinger!

If I’m to be honest, of the hundreds of hours of possibilities … (read more)