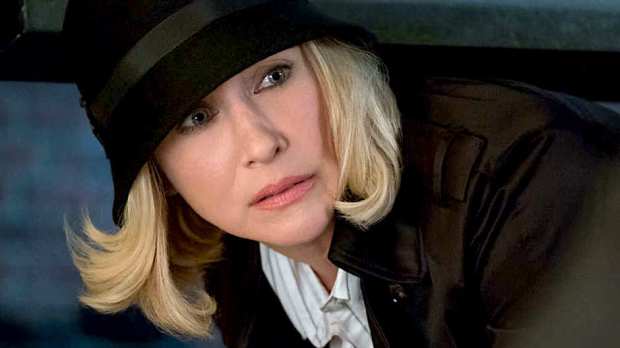 Brian Tallerico writes: Last week’s incredible premiere meant a bit of a letdown was coming to Bates Motel, although it’s only marginal as it appears that this season will be paced like a runaway train. Knowing this is the final arc creates a tremendous amount of suspense because, in the end, every character except Norman is expendable. Will he kill Caleb? Chick? Romero? Sam? All of the above?

“The Convergence of the Twain” opens with Norman Bates (Freddie Highmore) driving to prison to confront Alex Romero (Nestor Carbonell) after the revelation that he sent Jim Blackwell to kill him. Let’s just say it’s not a pleasant conversation. Romero wants Norman dead. Norman wants Romero dead. A five-year stint for perjury is the only thing that’s stopping one of them from killing the other one. Romero threatens him directly, saying, “I’m coming for you when you least expect it. So don’t get too cozy up in that house all by yourself.” I kind of love Angry Romero, a man willing to do anything to avenge the death of his soulmate, who’s getting even harder in prison while he plans his revenge.

We get a very brief moment with Dylan (Max Thieriot) and Emma (Olivia Cooke) this week, enough just to remind us that Caleb (Kenny Johnson) is on his way to White Pine Bay, looking for Norma (Vera Farmiga). It will be interesting to see how Dylan and Emma work back into the narrative, but that will have to wait for another episode. This one is about Caleb finding out his sister is dead, then discovering the shocking truth about her remains. His first hint, after breaking into the house, is finding a book called The Lost Art of Mummification. Not your average coffee table book.

While Caleb’s world is on the verge of falling apart, Norman is having a cup of coffee and stalking his new object of affection, Madeleine Loomis (Isabelle McNally). Director Sarah Boyd and company do a wonderful job of the across-the-street shot here, allowing us to further realize how much Madeleine looks like Norma from a distance. She comes over to get some java and runs into Norman. Unexpectedly, she asks if she can set him up with a friend. “You’re really cute and nice,” she says. If she only knew his secrets…. (read more)