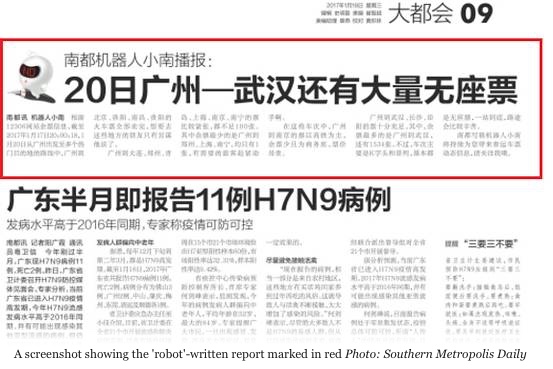 Te-Ping Chen reports: China has found itself in the midst of a full-blown robot obsession in recent years, with everything from robot monks to robot waiters grabbing headlines. Now, the robots are writing the actual headlines, too — in certain newsrooms, anyway. Last week, the Southern Metropolis Daily published its first-ever report written by what the newspaper describes as a “robot reporter.” The story, clocking in at just over 300 words, summarizes what train tickets are most in demand 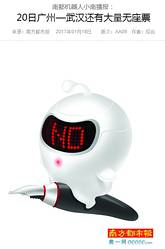 over the Lunar New Year holiday, during which millions of Chinese workers travel home to see their families. It discusses which routes are selling out fast and advises travelers to buy tickets soon, cautioning that for certain routes, all seats are sold out. “You’ll have to stand the whole way, the route will be more exhausting,” it advises. The Southern Metropolis Daily story is bylined “Xiao Nan Robot,” or ‘Little South’ robot and accompanied with a picture of a white, rotund robot riding atop a thick black pen. So far, though, the scope of robot reporters is limited, says Wan Xiaojun, a computer-science professor at Peking University who worked to develop the newspaper’s program. Mr. Wan explains that Xiao Nan is currently programmed only to analyze train-ticket sales, which accounts for the somewhat monotonous nature of its reporting. “There Are Still High-Speed Rail Tickets From Guangzhou to Numerous Destinations for Lunar New Year’s Eve,” ran one robot-produced headline today. “Hard-Seat Tickets on the 26th From Guangzhou to Zhengzhou Are Still Available,” ran another yesterday.

Sports are another fertile area for robot coverage: another robot-reporter program Mr. Wan worked on was used by news publisher Toutiao during the Rio Olympics last year, producing more than 400 news briefs, he said. Those briefs were built off published game statistics or summarized the transcribed narration of sports broadcasters, seeking out keywords such as “goal,” “red card” and more.

In the U.S., automated reports are fast becoming a norm for certain data-heavy kinds of news, such as finance, sports and weather. In China, meanwhile, the official Xinhua News Agency introduced its first so-called “robot reporter” in 2015, which it dubs Kuaibi Xiaoxin, or Fast Pen Xiao Xin, an apparent reference to popular Japanese cartoon Shin-chan, known as Labi Xiaoxin in Chinese – or Crayon Xiao Xin.