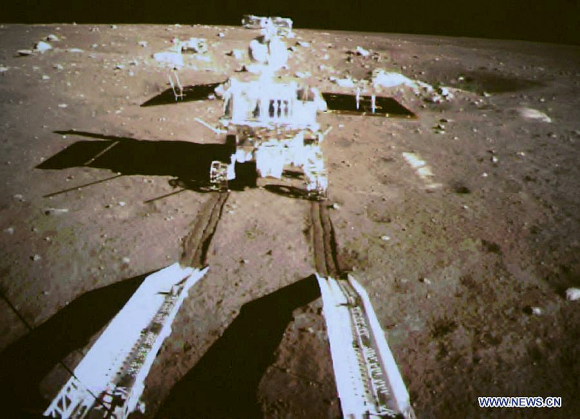 China’s first lunar rover separates from Chang’e-3 moon lander early Dec. 15, 2013. Screenshot taken from the screen of the Beijing Aerospace Control Center in Beijing. Credit: Xinhua/post processing by Marco Di Lorenzo/Ken Kremer China’s first ever lunar rover rolled majestically onto the Moon’s soil on Sunday, Dec. 15, barely seven hours after the Chang’e-3 mothership touched down atop the lava filled plains of the Bay of Rainbows. Check out the gallery of stunning photos and videos herein from China’s newest space spectacular atop stark lunar terrain. The six wheeled ‘Yutu’, or Jade Rabbit, rover drove straight off a pair of ramps at 4:35 a.m. Beijing local time and sped right into the history books as it left a noticeably deep pair of tire tracks behind in the loose lunar dirt. 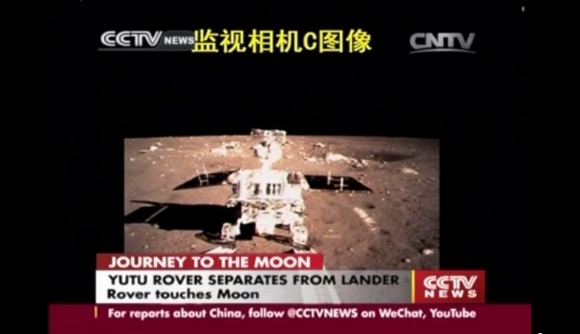 China’s first lunar rover separates from Chang’e-3 moon lander early Dec. 15, 2013. Screenshot taken from the screen of the Beijing Aerospace Control Center in Beijing. Credit: CCTV The stunning feat was broadcast on China’s state run CCTV using images transmitted to Earth from cameras mounted on the Chang’e-3 lander and aimed directly at the rear of the departing moon buggy. Watch this YouTube video from CCTV showing the separation of ‘Yutu’ from the lander: The scene was reminiscent of NASA’s Mars Sojourner rover driving of the Mars Pathfinder lander back in 1997.

Chinese space engineers based at the Beijing Aerospace Control Center (BACC) carefully extended a pair of ramps out from the lander in a complex process, drove Yutu onto the ramps and then gently lowered them onto the moon’s soil.

China’s Change’-3 mission had just safely soft landed on the Moon hours only earlier on Saturday, Dec. 14 at 9:11 p.m. Beijing time, 8:11 EST at the Sinus Iridum region, or Bay of Rainbows.

China thus became only the 3rd country in the world to successfully land a spacecraft on Earth’s nearest neighbor after the United States and the Soviet Union.

It’s been nearly four decades since the prior lunar landing was accomplished by the Soviet Union’s Luna 24 sample return spacecraft.